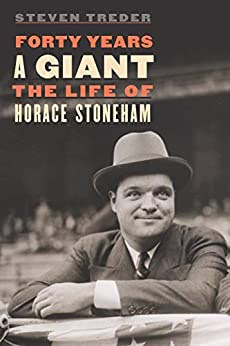 The photo on the cover of "Forty Years a Giant" is telling. Horace Stoneham is sitting in the front row of a baseball stadium,, with patriots bunting covering on the railing It's obviously a big day for the owner of baseball's Giants, if only based on the decoration. Maybe it's the World Series, or maybe it's Opening Day. But he's about to watch his team play, and that meant it was going to be a good day.

Stoneham indeed owned the Giants for 40 years, taking over from his father. Charles Stoneham was a slightly shady businessman in New York City, but none of the slight-of-hand passed on to Horace. The Giants became his life's work for 40 years, and he loved virtually minute until financial issues forced him to sell in 1976.

That's quite a run, and he certainly played a good-sized role in baseball history. Therefore, Stoneham certainly is a good choice for a full biography. Author Steven Treder delivers one with this good-sized (more than 400 pages) of text.

Horace always will be associated with something that happened about in the middle of his tenure. By the mid-1950s, it was obvious that the Polo Grounds, the Giants' home in New York City for decades, was no longer a good place for a baseball team. Fans were staying away in droves, in spite of the fact that emerging superstar Willie Mays was on the roster. What's more, the Brooklyn Dodgers were having similar issues just down the proverbial street. Stoneham and Dodgers owner Walter O'Malley came up with a plan.

The two men decided that moving both franchises was the best option under the circumstances, as hopes of a new stadium were quickly buried. In order to maintain something of a rivalry, the Dodgers packed for Los Angeles while the Giants ended up in San Francisco. As it worked out, the Dodgers got the better of the deal, building a better stadium and attracted millions from a larger fan base. The Giants didn't even get the benefit of nostalgia; the Dodgers' move seemed to anger their fans for decades while mourning for the Giants wasn't so public.

Stoneham was essentially the owner and general manager of the Giants throughout his tenure. That was something of a throwback to the old days of baseball, when such combinations were commonplace. The franchise was usually competitive in those four decades, even if the team only won the World Series in 1954 and took the National League pennant in 1962. The team had plenty of stars, but everything never quite came together most of the time. Maybe that was luck, maybe that was a case of Stoneham not having the skills to make everything work. Certainly Stoneham's affection for alcoholic beverages may have gotten in the way of good judgment at times.

Treder has done some good work writing about baseball history. He picked a tough subject for his debut. Stoneham was not the most outgoing of men around the media. What's more, he didn't save many records from his days with the Giants. Therefore, there's not much of a paper trail to follow. Meanwhile, Stoneham died in 1990, and at this point few people who works closely with him on executive matters are alive to tell the story.

Treder did the best he could under the circumstances. The book in some ways is a history of the Giants under Stoneham's leadership, with some additional details added at the beginning and end. Every season and many of the transactions are reviewed and judged retroactively. The author certainly hits some key points along the way, but it all feels a little distant. The text probably could have lost some pages without losing much of interest under the circumstances.

It's too bad that "Forty Years a Giant" couldn't have been written about 25 to 35 years ago. Such a book might have had more insight into the longtime leader of the Giants. Still, those who are curious about this good-sized figure in baseball history will find plenty to consider.