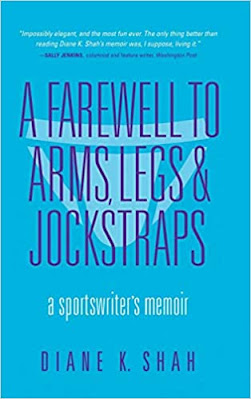 Care to see the story of women and sports journalism evolve in less than three hours?

"A Farewell to Arms, Legs, & Jockstraps" is your book.

This is the memoir of the writing career of Diane K. Shah, whose career took her in all sorts of places over the years. (I'll assume it's still going in some form at this point in her life.) The most interesting parts, though - especially from a historical perspective - are the ones that deal with her time spent reporting and writing about sports.

Shah came out of college in 1967 and found work for such publications as The National Observer (a weekly) and Newsweek. Diane grew up a big baseball fan, and found herself as something of a pioneer in the Seventies when the battles about allowing women into press boxes and locker rooms began. Shah wisely begins the book with some "war stories" from that era. She had to knock down proverbial walls and fight off a few advances from males, along the way, but certainly she played a part in the changes (for the better, I might add) in sports business.

She did plenty of freelance writing on sports subjects in the first couple of decades of her career. That's probably how most people became familiar with her work. If you are old enough, you might remember when "Inside Sports" was in its glory days in the 1980s, owned by Newsweek and becoming a worthy rival to Sports Illustrated in its field of literate, smart sports journalism. She was a frequent contributor there. But Shah's biggest claim to fame is that she became the first woman sports columnist at a big-city daily - the Los Angeles Herald-Examiner.

Eventually, the rules changed regarding women sports writers, and the tone of the book changes. It moves from fights with management to anecdotes about the business. And Shah has some good ones. Overall, the reputations of people like Mickey Mantle, Jim Rice, Steve Carlton and Pat Riley take a bit of a hit along the way, while some others are shown to be good people. In addition, Shah has anecdotes about some not-sports people. She developed a bit of a friendship with Cary Grant, of all people, while at the Herald-Examiner. Shah did a couple of stories on Paul Newman, interviewed Sean Connery, chatted with David Letterman, was served a drink by Frank Sinatra, and flew with Dennis Quaid. Heck, she even helped Daryl Gates - the Los Angeles police chief at the time - write his autobiography. That's a pretty good range, all things considered.

All of this is served up into bite-sized literary chunks, ranging from a quick snack to a good-sized portion. There are 51 chapters in all, and just about all of them go by swiftly. About the only exception was a story about the Moscow police department after the fall of the Soviet Union, which didn't reel me in. Shah has written a few mystery novels since leaving L.A., although that area goes mostly unexplored here. Shah knows what stories from her life will sell, and pretty much sticks to them.

The arrival of women in press boxes and locker rooms had a civilizing effect on the business. Sports journalism is less like a frat house party and more like a profession. "A Farewell to Arms, Legs & Jockstraps" goes down very smoothly, and certainly will be enjoyed by anyone who wants to read plenty of good stories about some famous people.

And really, isn't that all of us?