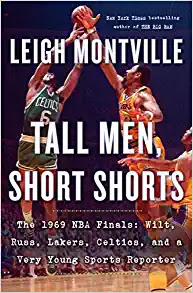 Leigh Montville was a member of the "Dream Team" even before the term was used in association with basketball.

Montville was part of the sports department at the Boston Globe in the 1960s. It was a group that influenced journalism greatly in that era, and its members went on to fill time and space for newspapers, magazines, books, radio and television. You've no doubt heard of Peter Gammons, Bob Ryan, and the late Will McDonough if you are reading this.

The rest of the staff was quite good too. They all seemed to know everything that was going on in their respective sports, essentially reinventing the "notes column" that dated back to Grantland Rice. You can't turn on a television broadcast of a national sports event without hearing from one of those "insiders."

Montville was part of that group. While he became a columnist within a relatively short period of time, Leigh was a general assignment reporter before that within the sports department. That meant if there was a game to be covered somewhere, off he went. The Globe had a morning and evening edition then, filled with different stories, and it covered almost everything, so there was always something to do.

The 1969 NBA Finals, though, certainly was a breakthrough moment for Montville. He covered those games in one of the biggest continuing assignments of his career through that point. As has been said, you never forget your first time. Montville's memories of the series, the reporting business, and his role in all of it go into his memoir, "Tall Me, Short Shorts." And in a way, it's downright charming to go along with always interesting.

The point of interest for most will center on the games themselves. This was one of those epic confrontations, with enough fascinating angles to keep anyone fascinated. Start with the Boston Celtics, who had rallied from a mediocre (for them) regular season to advance to the Finals without the home-court advantage. It was a team that had won 10 of the previous 12 titles, and it still had Bill Russell - the greatest winner in pro sports history - on the roster. It certainly felt like the end of an era, but how and when would it end?

Even so, the Los Angeles Lakers might have been the better story at that moment in time. The Lakers had two superstars in Elgin Baylor and Jerry West, but always came up as the bridesmaids. It got to the point where West never set foot in Boston unless he was playing there - too many bad memories. What did Los Angeles do to change that? The Lakers traded for Wilt Chamberlain, the greatest offensive force in basketball history. Those three almost could make the Nets' current trio of Kyrie Irving, Kevin Durant and James Harden look like benchwarmers.

That's a great start, but there was more to it. The two cities were quite different - books vs. glitz in shorthand. The arenas were different - rat-filled and cramped vs. new and spacious. The teams' reputations were different - team-oriented vs. star-oriented. The hometown announcers (Johnny Most and Chick Hearn) sounded different - gravelly vs. smooth. Could you ask for anything more?

OK, you could ask for some drama along the way. The home-court advantage held up through the first six games, and Game Seven was in Los Angeles. That was different in previous years, when the ghosts of Boston Garden seem to spook the Lakers at key times. West was magnificent, but he hurt his leg in Game Five and wouldn't be at full strength the rest of the way.

The storybook finish would have to wait for the Lakers, who lost Game Seven by two points. Call it a dream deferred until 1972, when West and Baylor would finally earn a championship ring. Russell and Sam Jones (another Hall of Famer) retired after that last title with bragging rights forever placed in their pockets.

It's all quite a story, although it might not have received the historical treatment that it should. The New York Knicks fulfilled their potential by winning it all in 1970 - beating the Lakers, of course. That Knicks' team was a great one, and it captured the imagination of all of New York. It became a turning point in the NBA's history, as the media outlets crowded around the Knicks to tell that tale. Therefore, a retrospective of the Celtics-Lakers series the year before is a fine idea.

Montville uses as many tools as he could fine to tell the story. He digs up the original stories that he wrote during the matchup as well as ones composed by others. Montville talked to some of the players involved, and found recordings of some of the games.

Mostly, though, the reporter calls on his memory bank to supply information. He has plenty of stories about how he did the work during those two weeks in the spring of 1969. Montville also comes up with stories about what he was thinking at the time, and how those first impressions have changed over the years as he reflects on them now.

That's a lot to digest, but there is one other point worth mentioning here. The rest of the "Dream Team" members at the Globe were information-oriented. They knew stuff that no one else did, and were thrilled to see it printed. But 1969 was a time when the so-called "New Journalism" was popular, and Montville practiced it. He was more interested in telling a story through anecdotes than through facts - preferably with a little style. This made him stand out a bit in the crowd when reading the newspaper.

But Montville's writing style can be a little quirky. He often refers to himself through the book as The Bright Young Man, or TBYM - the reporter who in hindsight didn't know as much as he thought he did, but was still soaking up techniques as quickly as he can. I can almost guarantee that some people will find this way of writing the story delightful and others will find it annoying. That's been the reaction to his other books, including ones on Manute Bol, Muhammad Ali, Babe Ruth and Ted Williams. I don't expect anything different here.

"Tall Men, Short Shorts," then, might not work for everyone as well as it did for me. I'm certainly in the target audience for this book - a sports writer who rooted for the Celtics when he was 13 during this series. Even so, there's enough material about a key moment in basketball history to keep most people well entertained.