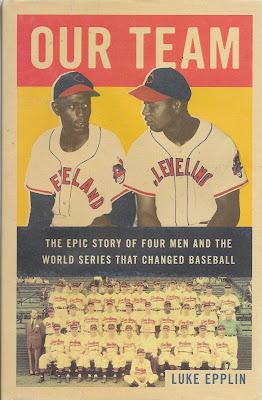 It takes some imagination to picture the scene. Think about four men, who couldn't be more different, racing toward a mutual destiny.

That's part of the charm of "Our Team," a look at a baseball team from the past.

We have Satchel Paige, who grew up in Mobile, Alabama, and went on to become one of the most legendary pitchers in baseball history. Speaking of pitchers, Bob Feller was from a farm in Van Meter, Iowa, where he became the most fabled young pitcher in history. Over in Paterson, New Jersey, was Larry Doby, a talented young athlete who was just figuring out how good he was. Finally we had Bill Veeck, the son of a baseball executive who never met a conventional approach he couldn't shatter.

They were all on their way to, of all places, Cleveland. They came together when it mattered for an astonishingly brief time in hindsight - basically only in 1948. However, the foursome helped produce the only World Series championship by the Indians in the past 100 years.

Their stories essentially make up Luke Epplin's story. As you might have guess, the key angle to most of this was the fact that baseball was on the verge of becoming integrated. Jackie Robinson first played in the Dodgers' organization in 1946 and arrived in Brooklyn in 1947. The Dodgers signed other black players, but most other teams didn't rush out to acquire talent from the Negro Leagues to keep up. A second team was needed to keep the momentum going.

Veeck was ready to be that team. He had operated a minor-league team in Milwaukee, where he developed his promotional skills. Veeck tried to purchase the Philadelphia Phillies, and stories circulated that he wanted to stock that usually dismal team with many black stars who could put an instant winner on the field. Naturally, the National League owners voted down Veeck's bid. But the colorful figure found another team to buy when the Indians came up for sale in 1946.

When he arrived, Feller was already there. He might have been the best young pitcher in history, and he was a star almost from the day he made his debut at age 17. Feller's career was interrupted by World War II, preventing him from piling up statistics that would rank with the best ever in many categories. The interruption in the war also gave Feller extra incentive to make money when he could, and he often took postseason barnstorming trips to do so. Feller was one of the big attractions, but the other was Paige - the biggest drawing card in black baseball. Satchel was good and he knew he was good, and the word was out that he'd need to take a pay cut to play in the majors.

In 1947, Veeck decided to sign Doby, who was 23 years old and had shown potential even though baseball was only one of his best sports. Larry debuted in July of that year, a few months after Robinson's beginning in the majors, but struggled a bit as he got used to the strange surroundings of a formerly all-white world that wasn't quite sure how to deal with integration. Even Veeck thought he should have given Doby more adjustment time before putting him on the Big Stage. Still, Doby was ready to break out in 1948, hitting .301.

The Indians became a contender in '48, but they were a little short in the pitching department. Veeck thought Paige could help on the mound - and if you could sell some tickets along the way, well, that wouldn't hurt either. Satchel did both. They were contributors to Cleveland's drive to the title that year, although they weren't the main reasons behind the surge. Feller wasn't up to his old standards either. But they all celebrated the title together, and integration took another step forward.

Epplin put in a ton of work researching this book, and it shows. The new information adds perspective in some areas, particularly about Feller's financial zest and circumstances surrounding the integration of the Indians (particularly from teammates). Books have been written by or about all four of the central characters in this story. It's really easy to fall in love with people like Veeck and Paige, who really are larger than life. Thus, some baseball fans already know plenty about the lives of those two. Feller comes off as a little bit less than warm here, while Doby certainly is the proverbial stranger in a strange land.

Epplin doesn't go deeply into what happened to all of them once 1948 was over, but it is surprising how quickly the situation changed. Veeck had to sell the team because of a divorce. Paige's skills had started to diminish late in the 1948 season, and he was gone from that city in 1949 at the age of 42. Feller wasn't quite as overpowering as he used to be, but hung on into the mid-1950s. Doby became a terrific player in the first part of the 1950s and was later inducted into the Baseball Hall of Fame.

This all goes by pretty quickly, which is a good comment about Epplin's approach and writing ability. I'm not sure anything could have been done any better. Those looking for a well-done first look at this memorable gathering of baseball personalities will find that "Our Team" will work nicely for them.