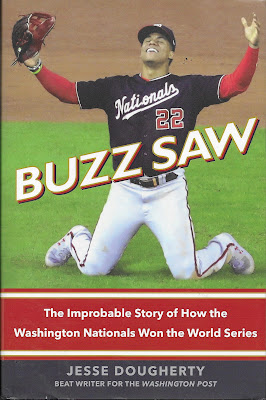 When a sports team approaches a championship, you can bet that there's one thing that always on the back of the mind of the reporters who are covering it: book deal.

Such publications are obviously food for those are hungry for more information about that championship season, whether it's mostly in word form or the quicker but less in-depth photo book. I speak with the authority of experience here, since I was contacted during the late spring of 1999 if I'd be interested in working on a book if the Buffalo Sabres won the Stanley Cup that June. (Note: I'm still waiting.)

Jesse Dougherty probably was the most surprised person in the District of Columbia when he was first contacted about writing such a book after the 2019 season. After all, the Washington Post reporter was with the team when it started 19-31 and seemed doomed to a disappointing year. But, as we know, things changed.

Thus, a while after the celebration and the parade, "Buzz Saw" came to life.

History really made this particular World Series win that much more sweet. The Nationals had been building throughout the 2010s, but they had been stopped short of the ultimate goal several times - in some cases well short of that objective. Washington lost one of its prodigal sons in Bryce Harper to free agency in the offseason leading up to 2019. While on paper it looked like a good team, losing a former Most Valuable Player usually isn't the best way to begin a season. But it did have Max Scherzer and Stephen Strasburg back in its rotation, and Patrick Corbin was added to the mix. So there was that. And Juan Soto was coming off a fine partial season for a 19-year-old in 2018, and he figured to carry some of the load left behind by Harper.

Those who had grown accustomed to the idea that the Nationals would be disappointing again had those feelings reinforced by the slow start. But eventually, Washington got turned in the right direction and played like one of the best teams in the league for the rest of the regular seasons. It's hard to know if that sort of run translates into postseason success, but the Nats at the least figured to be a tough out.

That takes up the first half of the book, which had some stories about individual players that read like feature stories. In fact, they probably were in their first version. But once the playoffs get going, the games get bigger and the moments become more memorable. Dougherty hits the high points, of course, and he also has plenty of other information that probably was sitting unused in the back of a notebook because there was no space at the time.

The Nationals ran the table, capping it off with a very unusual win in the World Series. The odd part was that the road team won all seven games. That had never happened before. Heck, home teams have rarely gone seven-for-seven in the series.

It does feel a little rushed in spots, no doubt due to the time constraints. But that comes with the territory. Let's face it - if you are a big fan of the Nationals, you may have purchased this as soon as it arrived at the book store. It certainly will serve as a good reminder of those nice moments along the way, even if you can recite them by heart at this point. If you are merely a baseball fan, it's not going to work as well. There are a few interesting portions for that part of the audience, such as a description of the Nationals' recruiting efforts of Corbin when he was a free agent.

It's difficult to make a book like "Chain Saw" a fascinating read because of the time crunch involved. It needed to be published by Opening Day the following year, and that's a difficult task. It's a professional job and moves along well enough. Still, it's a keeper only for those who have a Nationals bobblehead on the desk.