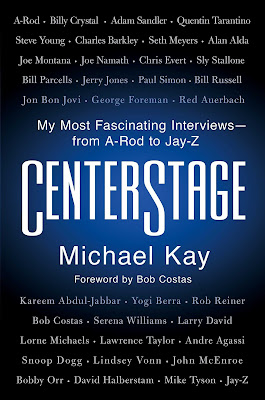 If you live in the Metro New York City area and upstate New York (or perhaps have an unusual cable or satellite package in other areas), you've no doubt come across the YES Network - particularly if you are reading this website. It's mostly associated with the broadcasts, and rebroadcasts, of New York Yankees games. The channel also shows the Brooklyn Nets in baseball's offseason.

That's nice enough, but YES is on 24 hours a day, seven days a week. The executives needed something to fill the rest of those hours ... because test patterns don't attract audiences or sponsors.

One of the ideas to fill that time came from an executive, who jotted down the idea "Inside the Actor's Studio - sports." You might remember the program that James Lipton did for Bravo for many years, as he talked to many top actors about their work. Why not sports figures?

Why not indeed? Michael Kay, the Yankees' play-by-play announcer, was tapped to host the show. Thus, "CenterStage" was born.

That was 20 years ago, and Kay has done a few hundred shows since then. Now he's taken the next logical step - written up transcripts of some of the best interviews, and combined them into a book. That publication, logically, is called "CenterStage."

While the show has a little slant toward New York figures in its selection of guests, it also has been able to collect interviews with figures who are nationally known. That allows this book to work on a national scale, even if YES is only known within that relatively small geographic area.

Kay does an excellent job on the show of interviewing the guests, and his staff has rounded up people who force you to listen. Who wouldn't want to talk to Charles Barkley for an hour. Or Joe Namath. Or Chris Evert, Bill Parcells, George Foreman, Red Auerbach, Andre Agassi, Bob Costas and John McEnroe. There are also people with faint to no connections to sports, like Billy Crystal, Lorne Michaels, Adam Sandler, Sly Stallone and Larry David. Derek Jeter never displayed the range Kay had in going from Snoop Dog to the late David Halberstam.

The program is generally quite good, and occasionally exceptional. My favorite might have been the hour with Paul Simon, who talked candidly about his career and had a guitar at his side if he wished to make a musical point.

The book by nature has to be a slightly weak substitute for watching the entire show. Obviously, most of the text is recycled from the television shows, and that hurts the rating a bit. The conversations have been edited down a bit, and they occasionally run into problems with dated material. For example, Parcells is a fascinating character, and he says here that he's done with coaching - shortly before he took the job as coach of the Dallas Cowboys.

The book goes by easily and quickly, thanks in part to the format that has plenty of white space between the questions and answers. Add it up, and "CenterStage" makes for pleasant reading even for those who aren't familiar with the program - even if the show is better than the book.

Be notified about new posts on this site via Twitter @WDX2BB.