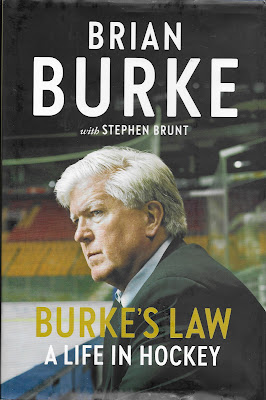 By Brian Burke with Stephen Brunt

I still remember the first time I met Brian Burke, and where it happened. I'm just not sure when it was.

I was working for the Buffalo Sabres at that point (somewhere around 1988), and we were on a road trip in Boston. Upon arrival the night before a game, Sabres general manager Gerry Meehan had some front office people into his hotel suite for something of a cocktail hour. While most of the faces were familiar to me, Burke's was not.

I seem to recall hearing that Burke was a player agent, but in checking the timeline it seems more likely that he was a former player agent by that time and was working for the Vancouver Canucks (probably in the spring of 1988). Burke came off pretty well - not too boisterous but someone who knew some stories and was good company.

A little investigating on my part might have told me that Burke wasn't a typical hockey executive. How many such administrators told Harvard Law School to wait for him for a year while he chased the dream of playing pro hockey?

That was Burke, and that was only a small part of what had come before that meeting, and what would come after it. The full story - or at least as much as he was able to tell as of the summer of 2020 - is included in his autobiography, "Burke's Law."

Burke apparently was always willing to go on his own path to what he perceived as success. He came from a big family where education was a major priority, but went to Providence College where he could play some hockey as well. Brian apparently was a fringe prospect, but got a look from the Flyers in his senior year. Burke played that "gap year," but was convinced that Harvard Law should be merely delayed and never ignored when it comes calling.

Burke walked into a good legal job out of Harvard - no surprise - and soon had started a business as a player agent. But when he had the chance to work with the Canucks, he jumped on it. That starts a series of stops throughout hockey, mostly but not exclusively as a general manager. Follow the bouncing ball - Hartford, the NHL, back to Vancouver, Anaheim (where he won a Stanley Cup), Toronto and Calgary. Whew. It's a tough business, and it takes a toll. Just ask Burke, who has had two wives and has spent a lot of weekends flying from somewhere to see his children every other weekend.

This book was written after Burke left Calgary, and had a job in the Canadian media. He therefore was free to look back at his time with a great deal of honestly, which adds plenty of color to the story. Want to learn how coaches are hired and fired, how players are traded, and what owners are like? This will tell you, often in profane terms. (A select few members of the media don't escape that description either.) Just as an example, Burke goes into great detail about how he went about the business of figuring out a way to get both of the Sedin twins on his roster when he ran the Canucks.  It should be mentioned that while Burke expresses anger at a lot of people here, he also says he worked hard to patch up those differences down the road. Credit to him for that.

Oddly, Burke probably received the best publicity of his life concerning his son Brendan. When the young Mr. Burke came out as gay, Brian was supportive of his action and became a very public supporter of LGBTQ community. The senior Burke appeared in a few Gay Pride parades. Tragically, Brendan was killed in an auto accident in Indiana in 2010. That section obviously was a difficult one to write.

It's obvious through the 288 pages in "Burke's Law" that he loves hockey. In the last couple of pages, Burke writes that when it came to the next job in the sport, "I'm done." I'm sure he meant it at the time. But since the book's publication, he took a job as President of Hockey Operations with the Pittsburgh Penguins. No doubt he'll have more stories to tell when that's over. In the meantime, this memoir offers plenty of honest and interesting anecdotes about one of hockey's more interesting subjects.