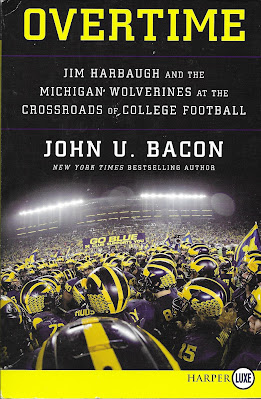 By John U. Bacon

It may be time to call John U. Bacon the writer-in-residence for the University of Michigan's football program.

He's earned that title. After all, Bacon has written three other books on the Michigan team, and other books on college football in general and the Wolverines' hockey program. He has taught at Michigan and Northwestern, so the odds are pretty good that he can put one word after another in a sentence, and one sentence after another in a paragraph. Oh, he and his family live in Ann Arbor.

Therefore, it's easy to guess that no "outsider" has the sort of access into Michigan football than Bacon. It shows up on every page of "Overtime," a thorough and always interesting review of a particular team of Wolverines.

In this case, the team is the 2018 edition. The Wolverines were coming off a disappointing (for them) 8-5 season after a pair of 10-3 years after the arrival of head coach and former Michigan quarterback Jim Harbaugh. That 2017 campaign was a bit below the usual standards for football success at the school, and Michigan had not been higher than third in its division of the Big Ten in Harbaugh's three years on the job.

Everyone connected with Michigan was hoping for a rebound - heck, "demanding" might be a better word for it in the cases of a few zealots. I can't say I had a vivid recollection of how the 2018 season went, unlike those zealots, so it was all something of a surprise to me within certain parameters. However, your level of knowledge about that particular season isn't too important. Bacon is after bigger game, as he searches for stories that don't pop up in the daily reporting of the theme. The weekly games are important, of course, but Bacon makes a wise decision by not devoting too much space to a play-by-play description of each one.

Therefore, biographies of some of the people in the program fill up a great many pages. Harbaugh himself gets something of a mini-biography, helped by the fact that Bacon knew him during his childhood. Most of the family, including his father the coach and his brother the coach, chip in with anecdotes about the interesting ride that Harbaugh has taken over the years - and it's not over yet.

I'd say it was lucky that Bacon came across several players who are well-spoken and have unconventional interests by the standards of the sport. How many college players want to be astronauts? Michigan had one. The Wolverines also had several players who were sons of Michigan players, which makes for a nice tradition. The story of what it's like to play major college football comes across well, and the word that sums it up is "demanding." Those kids clearly need more hours in a day.

What comes across rather well is that Michigan is trying extremely hard to do things the right way. The university has high academic standards, so it's not for those who don't have a great deal of interest in studying. There aren't many big-time schools trying to seek excellence in both areas; Stanford certainly comes to mind. On the other hand, it makes recruiting a little easier in the sense that some top prospects never could do the school work at Michigan, and thus can be taken off the list of prospects very early in the process. And to be honest, Bacon seems quite happy to praise Michigan for its approach.

Bacon also jumps into a variety of areas that have become attached to college football, and has some strong opinions about some of them. That covers such areas as recruiting on a national scale (and abuses found there), and the relationship between teams. For example, Michigan has a few rivals - but the nastiest is Michigan State, as the play sometimes devolves into cheap shots and the Spartans' fans have little use for the other side. There's also a good look at how much time and money go into feeding a beast like this, with such matters as equipment, video, scouting, medical costs, etc.

This is the first time I've read one of Bacon's books, as I have no connection to Ann Arbor. But I clearly picked a good one to read. "Overtime," with its fresh reporting and sharp analysis, presents a first-class look at a football program that has a unique set of obstacles as it tries to achieve excellence on and off the field. And if I thought it was excellent, the Michigan alumni will cherish it forever.