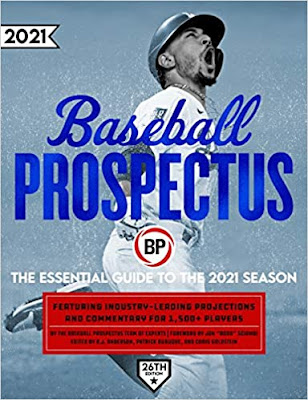 They really did it.

The smart guys from Baseball Prospectus managed to put out their 2021 annual this spring, and make it the same size as usual - close to 600 pages.

This is no small matter. The book, considered a sign of arriving spring in my household, has been cranked out for years and years (this is the 26th such edition) - filled with information about the previous season and the upcoming one.

But baseball fans may have noticed that the 2020 season was a bit, well, unusual. The major league teams played a 60-game schedule, and the minors took the year off. Yes, the rosters were expanded and some top prospects took part in workouts and intra-squad games at alternate sites. Still, it was by no means a typical year, thanks to Covid-19.

Even though the book did indeed come out, it is a little different than normal. Since it was wiped out, the list of potential prospects that usually fall at the end of every day's chapter had to be lost. Most of them probably won't matter to most fans, but sometimes a guy comes out of nowhere during the season and the BP notes are the only way to even learn a little about him from a distance - especially in a critical sense.

The shortened big league campaign and the missing minor league seasons probably have taken a little out of the fun about this annual book. It's a little difficult to extrapolate performance on a 162-game season from a mere 60. Meanwhile, the minor league guys had to take a year off in many cases, and no one can be sure what's ahead for them. I suppose some of player descriptions read like the ones from a year ago, since they may not contain much new information.

Even so, it's a primary source of good information about players and their teams. The book has become quite dependable in format, with a couple of paragraphs on every important player in the game accompanied by statistics on the last three years and projections for 2021. The numbers are as complicated as you want to make them. You can stick to batting average, home runs, RBIs, ERA, saves, etc. if you are more of a traditional fan. Those who want to dive into DRC+ and DRA- are welcome to do so. There is an essay on each of the teams, which because of the many different authors encompass a variety of styles. There are also a few pieces of writing that are simply about baseball.

I tend to mostly stick to the major league teams' players in scanning this book as well as the game's top prospects. The exceptions are the two teams I follow more closely than the others, and thus am familiar with the talent under the surface. Otherwise, I'd be reading for many more days. One thing I can say after reading and skimming all of this book is that there sure are a lot of pitchers getting Tommy John surgeries. Parents, if your son can't throw 98, have to go to medical school and repair the ones who can throw 98 - because they'll need a doctor down the road in all probability.

The snark level of the writing of the player capsules tends to vary from year to year, in part because major league teams keep hiring graduates of the publication. This year's batch is down a little for whatever reason. Points of view still pop up on some social issues affecting the game. Actually, it's rather interesting to read about the guys who are willing to take stands on such matters or who work quite hard in the community.

For those of you familiar with the book, "Baseball Prospectus 2021" ought to work quite well as usual. You'll pick it up frequently during the course of the season for reference. It might not be as informative as usual, but add that to the list of reasons to hate the pandemic. If you're not familiar with it, I'll give the usual advice to take a look at it at a bookstore to see if you can handle it.