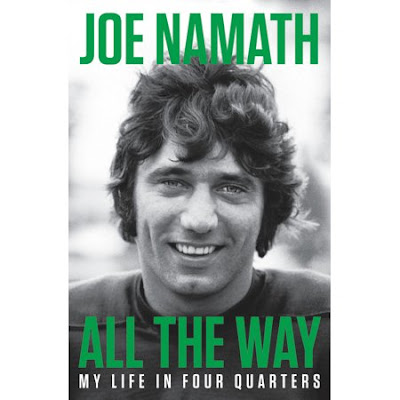 By Joe Namath with Sean Mortimer and Don Yeager

If there was ever a review-proof book, "All the Way" is it.

Those who grew up watching - and perhaps idolizing - Joe Namath fling footballs around football stadiums in the Sixties and Seventies no doubt already have run, and not walked, to the nearest bookstore or on-line ordering outlet to pick up a copy of his second autobiography. The first book, "I Can't Wait Until Tomrrow ... 'cause I Get Better Looking Every Day" came out soon after the Super Bowl III in on January 12, 1969.

Namath and his New York Jets won that game more than 50 years ago, and the win might have been the most important game in modern pro football history. The huge upset drew a great deal of attention, and helped the NFL become the biggest sports league in North America.

Namath already was world-class "cool" before that game. He came out of Alabama and signed a legendary $400,000-plus contract with the Jets of the American Football League. Namath had style on and off the field, a rebel with his white football shoes and love of the nightlife. Muhammad Ali was out of the same mold, but Namath was a bit more acceptable to large portions of America. Now the ex-quarterback looks back on portions of his life - and his now aging fans no doubt will revel his the stories.

The book comes with a warning at this point, though: If you like your books structured, then you may have come to the wrong place.

The guiding premise is quite simple, and appropriate. Namath sat down at the computer screen and watched a video of that winning Super Bowl - something he had never needed to do before. It's sort of like having Joe at your side while the two of you are in the living room, watching it on YouTube. He's tough on himself, still feeling angry when he doesn't connect on an easy pass. Namath also learned some lessons about the game, along the lines of "I didn't know Unitas came into play that early."

You may come to one conclusion reading about the details of the game: Namath might not have been the most valuable player of the game. On one hand, that may be a reflection of the fact that Joe is pretty tough on himself here at times. On the other, he threw no touchdown passes in a game where the Jets only scored one TD (to go with three field goals), and he never threw a pass in the fourth quarter. Nevertheless, he did engineer the Jets to score enough points to beat the Colts, who were considered one of the great teams in NFL history until the day after the game.

But from there, Namath goes off on tangents. And more tangents. There's no order or warning about what's coming next; it is simply a matter of what enters Joe's mind. The basics are covered - something about his school days, recruitment and playing in Alabama, signing with the Jets, finishing his career with the Rams, the Hall of Fame induction ceremony, and what his life is like now.

In case you are wondering, the famous 2003 Suzy Kolber incident - "I just want to kiss you" during an on-field interview with ESPN - comes up. Namath says it was something of a turning point in his life, as he realized he needed help with an alcohol problem - prompted by his 2000 divorce. It sounds like Joe is having a happy ending to his life, thanks in part to a clean lifestyle and knees that give him a lot less trouble now than they did in his football days.

Even so, there's not much flow here, and there are large portions of Namath's life that don't get any attention here. Characters come and go without much introduction. Namath is described at the back of the book as a "reluctant author," and the text certainly comes across that way. Having two co-authors is often a sign that it was a struggle to get the story correct on paper; I have no idea whether that was the case here.

Still, the voice in these pages is authentic, and that probably is enough for most people. The book has been well received so far, so apparently the lack of organization wasn't much of a problem for other readers.

That's fine. I liked Mark Kriegel's biography, "Namath," more than "All the Way." But it sounds like readers want to hang out with Joe for a while through this book. Who am I to disagree? They'll have a good time - I guarantee it.

Be notified of new posts on this site via Twitter @WDX2BB.
Posted by Budd Bailey at 5:28 PM