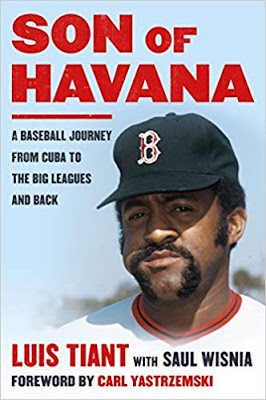 By Luis Tiant with Saul Wisnia

I'm a little biased when it comes to the subject of Luis Tiant.

In the spring of 1976, I needed a number for a shirt for a sports team. I picked No. 23 - for Luis Tiant. This was way, way before Michael Jordan made it popular.

Not only was Tiant really good, but he had style. His twirling windups while pitching for the Boston Red Sox hadn't been seen before and haven't been seen since. As someone wrote, Tiant seemed to be able to look at everyone in the ballpark before actually delivering the ball to the plate. It sort of looked like a pitching pretzel.

Add that to the fact that Tiant had character and was a character. Boston wasn't a particularly happy place in the 1970s when it came to racial issues, but there was one man who crossed all of the boundaries - Tiant. When he walked in from the bullpen for the start of a Red Sox game, a sellout crowd greeted him with "Loo-ee" chants.

That's the starting point of a good autobiography, and Tiant delivers one in "Son of Havana."

The major league baseball pitcher had the biggest turning point of his life at a young age. Tiant was from Cuba, the son of an outstanding pitcher himself. Luis had the chance to pitch in Mexico City and did so, but along the way he discovered that Fidel Castro had essentially closed the borders for Cubans. If Luis returned to Cuba, he probably wouldn't be able to resume his baseball career. But if he stayed in Mexico to pursue that dream, he might never see his family again.

It's hard to imagine what's involved in that sort of decision. Tiant's father knew what it was like for a black Cubans to try to play baseball in the United States, encountering racism along the way. He urged Luis not to go through what he went through. Other family members knew Tiant's dream was to pitch in the big leagues and urged him not to come home. In the end, Tiant stayed away from Cuba - for more than 40 years, as it turned out. As it turned out, Tiant and Tony Perez were two of the last starts to leave Cuba before the door slammed shut. The information about that decision and that era is the best part of the book, as it relives an era that hasn't gotten much publicity.

Minorities in baseball probably didn't get the benefit of the doubt in the early Sixties, and Tiant waited until 1964 to reach the majors. He was good for several years for the Cleveland Indians, and became great in 1968 - 21-9 with a 1.60 earned-run average. But a bad year and a trade to the Minnesota Twins followed, and in the spring of 1972 Tiant was unemployed.

The Red Sox took a small chance on him in 1972 by signing him, and promoted him to the major-league roster. There he went 15-6 with a 1.91 ERA, leading Boston to a near-miss in the playoff race. Tiant followed that with six more fine seasons, including three with 20 wins for the Red Sox, in the Seventies. Boston was a contender during that era, and Tiant was the heart of those teams. Along the way, he almost personally eliminated the cliques that had been part of Red Sox teams for years. By the way, Tiant had a well-publicized reunion with his parents in 1975 - when he helped the Red Sox reach the World Series.

Tiant has bounced around a bit since leaving Boston after 1978 - pitching a few years and retiring, doing a little coaching and participating in business, but mostly being Luis Tiant for a living. It's a great gig if you can pull it off, and he can.

Saul Wisnia does a good job of adding background information here, providing an introduction to each chapter. A couple of stories get repeated, and the comments from others can be a little fawning, but it it Tiant's book.

"Son of Havana" mostly will be of interest to Red Sox fans of those 1970s teams that couldn't quite win a World Series. But the rest of the story is interesting enough to carry its weight with any fan. It's a solid book, one that probably should have been written earlier but is still enjoyable today - even to those who don't wear No. 23 on their backs.

Be notified of new posts on this site via Twitter @WDX2BB.
Posted by Budd Bailey at 1:03 PM