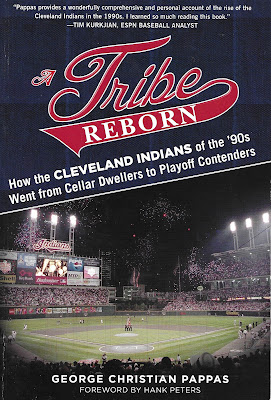 These days, you have to have been around the block a few times to remember when the Cleveland Indians were bad.

The baseball team has been in the playoffs five times since 2013. This stretch has ended a bit of a dry spell that started around 2001 after the team had six playoff appearances from 1994.

But if you have been around the block several times, you remember when the Cleveland Indians were always bad. They went more than 40 years without reaching the playoffs. The team usually played in Memorial Stadium in front of thousands of empty seats, and often was the subject of rumors about a move to another city.

That turnaround in the late 1980s and early 1990s took some time, but baseball seems secure again in Cleveland. The story about the reversal is a good one, and George Christian Pappas tells it nicely in "A Tribe Reborn."

Pappas did get off to a bad start with me. He opens the narrative with the Indians' World Series parade of 1995 - even though the team lost to the Atlanta Braves. He asks, "Where else would you find a parade to celebrate a losing team? Then he adds, "Buffalo, where the Bills dropped four consecutive Super Bowls?" Well, George, actually, Buffalo didn't throw a parade for the Bills team after losing Super Bowl XXV - but it did hold a giant rally in front of City Hall in celebration of a great season. We Rust Belt Cities have to stick together.

But from there, the book settles in nicely. He soon goes into the sale of the Indians to Dick Jacobs, who had big plans to rebuild the franchise and downtown area. Jacobs hired good baseball men like Hank Peters and John Hart, who stocked the franchise with great young talent in piecemeal fashion. Then the team got to work in an effort to put a beautiful new stadium right on the southern edge of downtown. While it wasn't planned to go step-by-step, the Indians were ready to field a contender when that new stadium (Jacobs Field) opened in 1994. Cleveland had such stars as Albert Bell, Carlos Baerga, Manny Ramirez and Kenny Lofton ready to emerge.

Sure enough, the Indians made it to the World Series in 1995 and 1997, but didn't have quite enough to win it. The team's drought from 1948 continues to this day. But it was great fun while it lasted. Basically, the franchise had so much talent on offense that it simply couldn't afford to keep it all. The pieces slowly peeled away, and Cleveland needed several years to rebuild its fortunes.

This could have been pretty dry, or at least familiar. So Pappas gets lots of credit for making the story interesting. He talked to several people who were involved in the building process, and that helps bring a personal touch to the tale. Pappas also uncovered a few stories that probably aren't known to anyone but huge fans.

For example, in 1994 the Indians actually made a trade in the middle of the strike. They acquired Dave Winfield from the Twins for a player to be named later, just in case the season resumed. It never did, so Winfield never put on a Cleveland jersey that year. When the two sides discussed compensation for the Twins in this unique situation, they came up with a solution. Everyone would go out to dinner, and the Indians would pick up the check.

The biggest complaint about the book might be about the ending. The playoff games in 1995 and 1997 are given quite short capsules, and thus don't capture the excitement of the moment too well. In addition there are some pages devoted to relatively advanced statistical analysis that feel out of place in a book like this. I guess there were a few factual errors along the way. I'm not in favor of them, but some baseball fans are almost oversensitive when it comes to such slip-ups.

Still, most of "A Tribe Reborn" is an enjoyable trip in the time machine when the excitement in Northeastern Ohio was rekindled. Fans of the team - and of baseball - ought to be thoroughly entertained.