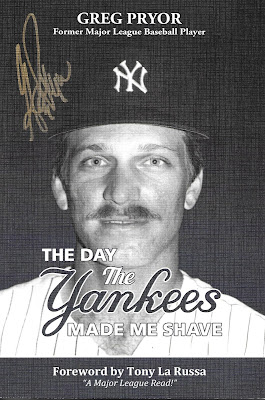 Greg Pryor may be on to something here.

Virtually everyone who has ever put on a baseball uniform in the pros has accumulated some good stories about his experiences along the way. They have bumped into famous people, played in some memorable games, and had some accomplishments.The longer the career, the better the chances are for more "collisions" with history.

Pryor is a good example of that. He no doubt was one of the last people you'd think would ever reach the pros if you saw him during a unspectacular career in high school. (As you probably know, just about everyone in the pros dominated the competition as a kid.) Greg went to college, worked hard and continued to improve, was drafted into the pros, and reached the majors - briefly - at the age of 26.

Usually those players wash out of the sport by then, but not only did he reach the majors for good in 1978 at the age of 28, but he stayed for nine seasons. Pryor even won a championship ring with the Kansas City Royals in 1985. In hindsight, it was an unusual ride that bordered on the amazing, and is a tribute to his perseverance.

At some point, Pryor decided to get some of his baseball memories down on paper, if only for the entertainment of his friends and family. Greg wrote a book that came to be called "The Day the Yankees Made Me Shave."

Let's be realistic here. There probably isn't a great market across this wide country of ours for a book by a utility infielder from the 1970s and 1980s. But in the world of self-publishing, there really doesn't have to be a big market; a small, appreciative audience will work fine.

Pryor has done this task really well in this memoir. He's taken 27 memorable events from his baseball career - one for each out by a team in a game - and used them as a launching point for discussions of his career. No matter how true the second paragraph of this review is, it's still a surprise that Pryor was on hand for some memorable events. Just for starters, he was the only player to take part in both "The Pine Tar Game" and "Disco Demolition Night." George Brett borrowed his bat to record the 2,000th hit of his career. (Greg still has the bat - autographed, of course.) When Minnie Minoso had his last appearance in the major leagues at the age of 54, he pinch-hit for Pryor in 1980. By the way, Tony La Russa provides the foreward.

One time I had the chance to tell a pro athlete turned author that if he was going to do a book like this, he should take the time to do it right. Pryor gives credit to a couple of editors who made the book read well. I suppose I could argue that the 27 stories feel self-contained and that some material gets repeated along the way, but I can't say it presents that much of a problem to the reader. The story goes by pretty quickly. Meanwhile, the layout is just fine for these purposes.

I wouldn't have known about this book if I hadn't "bumped into" Pryor in a Facebook group. I'm from the right era to enjoy this literary effort. You may not qualify in that category, but those who do will find "The Day the Yankees Made Me Shave" to be an entertaining time machine of a book.