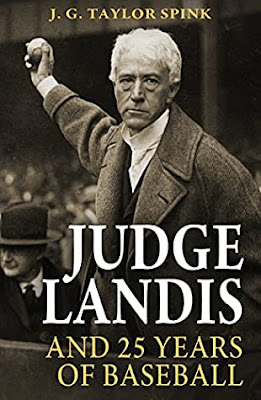 What's a book that was first published in 1947 doing here?

That's a bit of a story.

The publisher of The Sporting News wrote a biography back then of Kenesaw Mountain Landis, the commissioner of baseball who died in 1944. Over the years, that publication (which survived in a print format for more than a century before becoming web-only) sometimes did a reprint of the book to sell to the public. J.G. Taylor Spink had a ringside seat to Landis' long reign over the National Pastime, so he was qualified to write it. (Since finishing it, I have been told that Fred Lieb did the actually writing.)

Here we are then, more than 70 years later, and the book still has life. "Judge Landis and 25 Years of Baseball" recently popped up as a Kindle document at a bargain price. Since I've been aware of it for something like a half-century, I figured it was worth a look.

And that's certainly the case, at least for some baseball fans.

Spink certainly backs up the claim that Landis was something of a legendary character. His father was wounded in Georgia during the Civil War. He recovered and had a son, but the parents couldn't agree on a name. They eventually went the "Kenesaw Mountain" route, although that part of the world eventually settled on "Kennesaw Mountain" as a formal name for the region. Both spellings had been acceptable at the time. It sounds like Landis stuck to Ken, or better yet, Judge, as a name.

Landis went into law and became a judge in 1905. Spink's description is something out of a movie, as Landis was very flamboyant. It sure must have been fun to watch him on a typical day on the bench. Landis gained a national reputation when he fined Standard Oil more than $29 million, which was a lot of money in those days.

He caught the eye of baseball owners when he took his time deciding a suit by Federal League owners against their established counterparts, which essentially doomed the Feds' chances of surviving. Landis also was known to take time off from the court to catch the games of the Cubs and White Sox. So when the scandal of the "Black Sox" of Chicago took place in 1919, baseball needed someone to take charge of the sport and rebuild its reputation.

The Judge was up to the challenge. One of his first actions was to give lifetime bans to the White Sox players who were implicated in the game-fixing scandal, even though they had been declared innocent in a criminal trial. Yes, he meant business. Baseball certainly had a gambling problem at that point in its history, and Spink makes it clear that Landis' first priority was to clean that part up of the game.

Many of the decisions out of Landis' office in his first decade or so had something to do with wagering. From there, the Commissioner had other things on his mind. He managed to push baseball through the Depression without losing any teams - no small accomplishment - and ushered in some changes like the introduction of the All-Star Game in 1933. Landis spent some time trying to bring order to the relationship of the major and minor leagues, as the minors were slowly losing their status as independent operators.

Part of the fun of a book like this is that Spink was an eyewitness to the Landis Era. Here's a person who was the official scorer in many of the World Series games in the 1910s. Spink was close enough to American League founder and President Ban Johnson to have him stay at his house during visits to St. Louis.

There's also a certain charm in the writing style of the book. It's just a little bit old-fashioned - not quite like the sports writing of a century ago, but a little more flowery than what we see today. For example, Babe Ruth is called "the former chubby urchin from the Baltimore waterfront." There's a great story about Alabama Pitts, who was send to "New York's Big House on the Hudson" for a crime - and then became the subject of a national debate about his playing status when he was released from Sing Sing. There are a lot of chapters, but most are quite short and go by quickly.

The book does come with a couple of drawbacks. Some of the chapters have long statements about certain issues reprinted verbatim. Since the matters aren't particularly topical or interesting this far away in hindsight, it's easy to skip over them. If you are looking for baseball stories, well, the players take a secondary role here - although some good-sized names do come up (Ruth, Ty Cobb, Tris Speaker, Branch Rickey).

And, of course, there's the matter of integration in baseball. Remember, this was published in 1947, when Jackie Robinson was just joining the Brooklyn Dodgers to break baseball's color line. This area goes unaddressed here, which seems like a reflection of the time. Even the baseball historians of today aren't sure what Landis' racial attitudes were.

"Judge Landis and 25 Years of Baseball" certainly is a valuable reference source for those historians who want to look back at a time when the sport became more professionally run. In other words, I probably should have read it sooner, but I'm glad I finally got to it.