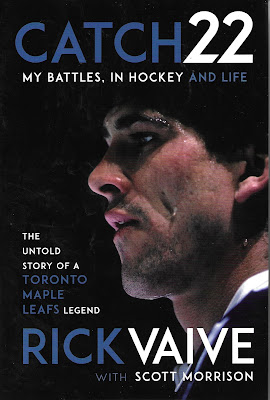 By Rick Vaive with Scott Morrison

A few years ago, I had a good-sized chat with Rick Vaive at a banquet. I knew him very slightly when he was a member of the Buffalo Sabres in the late 1980s when I worked there. I knew he had taken a pounding as a hockey player - we used to call him "Robocop" because of all the equipment he needed. Still, it was a surprise to know the toll he had taken physically. It took - and takes, I assume - him 45 minutes to do enough stretching each morning after getting out of bed to be able simply to function for the rest of the day.

However ... it turns out that those physical problems weren't his biggest issues during his life.

And that's what makes "Catch 22," Vaive's autobiography, worth reading. He and co-author Scott Morrison have come up an honest look back at a life that could be described as "surprisingly difficult."

At first glance, Vaive seemed to catch a lot of good fortune in his career. He scored at least 50 goals for the Toronto Maple Leafs three straight times. Rick made plenty of money, drove fast cars, lived in nice houses, and so on. That's a very good head start toward a successful life.

Yet this was not a life out of a storybook, and the physical pounding was only part of the problem. Vaive came out of a household where alcohol was ever-present, and he carried some baggage from those years into life as an adult. By the sound of it, he did a great deal of it during his playing days, and that was more expected behavior among his peers rather than a cause for concern. It's tough to know how much of a problem that was in hindsight, but it certainly had some sort of effect. He eventually went over the edge, admitted his problem and gave up drinking, fell off the wagon briefly, but apparently has been sober for a while. Good for him.

There were other issues as well. Vaive hated to fly - probably still does. Hockey players spend a lot of time on airplanes, and I can't imagine what it's like to perspire throughout a cross-country flight. Then there's the matter of an internal problem that left him with bladder issues. The only athletes I've ever heard discussing the matter of bed-wetting are Mickey Mantle and Rick Vaive.

Vaive then represents something of a case study in unfulfilled potential. At 25 he was one of the top goal-scorers in the league, but never reached those heights again. Rick was still effective until he was 32 - always scoring at least 20 goals per season  - but dropped off the map very quickly and was out of hockey at 33. How much did injuries contribute to that, and how much did other demons contribute to that? We'll never know.

"Catch 22" could have been a very standard story as these things go. After all, he played for some Toronto teams in the 1980s that were known more for their chaos than their successes. It was never easy to be on an organization run by Harold Ballard, as many people can attest. There are a few stories about some teammates that he had along the way - Borje Salming, Wendel Clark, Denis Savard. The people in Buffalo will be interested in reading about Clint Malarchuk, Rick Dudley and John Muckler during his time there as well as a note about Floyd Smith, the former Sabres player and coach who was Vaive's coach in Toronto.

However, Rick gets points for honesty here, and that lifts the book a notch. It's a good reminder that it's nice to know the full story about someone before coming to any ultimate judgments on their lives.