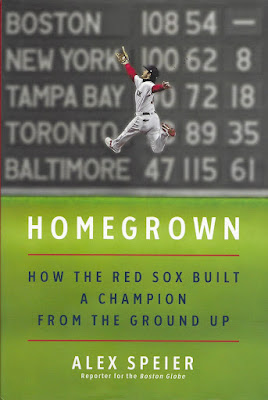 Sometimes a sports championship season looks like almost too simple, as if the plan set a few years in the past comes together just like it was supposed to do on the whipboard.

Such was the case for the 2018 Boston Red Sox, who had gone through a variety of ups and downs in the years leading up to that season. Everything came together nicely as the Red Sox won 108 games in the regular season, and then went 11-3 in the playoffs in a dominating title season. It was, by almost any standard, the best year in Boston's baseball history and one of the most dominating team performances in recent years by any group.

Alex Speier knows that five-year plans aren't everything. The baseball reporter for the Boston Globe had followed the Red Sox' farm system closely for the years leading up to 2018. That makes him well-suited for the task of writing "Homegrown," the story on how the '18 Red Sox came together.

One look at the starting lineup for that team reveals that Boston did a fine job of identifying young talent and helping it reach the majors. Of the non-pitchers, such players as Mookie Betts, Xander Bogaerts, Andrew Benitendi, Rafael Devers, Jackie Bradley, and Christian Vazquez all came up through the system. It's a very good young corps, and at some point it's going to be tough to pay all of them. Even so, there's nothing better than good young talent when it comes to getting a head start on the competition.

That's because they are receiving less money than their current worth; the young players get less than they should in the current system, while the older players are overpaid in some cases. In this case, it freed up the Red Sox's ample financial resources to acquire pitchers such as David Price, Chris Sale and Craig Kimbrel.

But it is still a jigsaw puzzle with a lot of parts and no guarantees everything will fit together. Boston's prospects hit some speed bumps along the way, and the front office tried to learn about how to solve those problems on the fly. While Betts and Bogaerts turned out fine, Henry Owens and Blake Swihart failed to live up to their perceived potential for whatever reason.

Speier does an extremely nice job of telling the complete story about how the team was put together. It includes conversations with front office and minor-league staff members, interviews with players, etc. Some didn't survive the process, such as general manager Ben Cherington and manager John Farrell - who had some fingerprints on parts of that title. But contributions came from many sources, particularly when the team traded other young players for major leaguers that could fill gaps.

The story flows along nicely, and there are plenty of nuggets of information that turn up along the way that can still fascinate. For example, the background details about the departure of Farrell at the end of the 2017 - in spite of winning the division that season - have plenty of surprises for most. Speier is thorough and knowledgeable, and it shows.

Reading this book in the summer of 2019 essentially proves Speier's point - that it doesn't always go to plan. The Red Sox of 2019 haven't been able to put the magic back in the bottle for a second straight year, as injuries, free agent losses, etc. have caused problems. Yes, it's not as easy as it looked a year ago.

Admittedly, this is going to be of the greatest interest to those who follow the Red Sox very closely. Those readers will know the names of the players and executives involved, no matter how obscure they are to the outside world. They'll be the ones complaining that this book deserves five stars, and they could be right. Even so, "Homegrown" offers a peek behind the curtain for almost any fan who wants a look at how teams are assembled. That group will like it a lot too.

Be notified of new posts on this site from Twitter @WDX2BB.
Posted by Budd Bailey at 4:30 PM