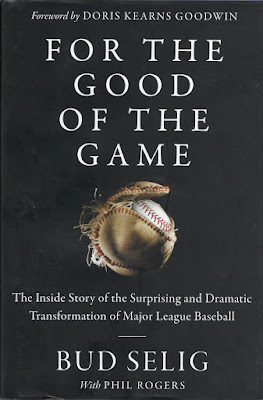 By Bud Selig with Phil Rogers

It seemed like an odd move at the time. Bud Selig as baseball commissioner?

Selig was the majority owner of the Milwaukee Brewers for more than 20 years. Even though major league's baseball ownership is a small "club," the Brewers shouldn't have had much of a voice in the sport's operations considering their status as the representative of one of the smallest markets in baseball.

Yet, Selig carved out a place for himself at the table. He seemed to get along with just about all sides during internal disputes. When baseball needed a new commissioner when Fay Vincent was pushed out the door, Selig took over. (The Brewers were eventually sold.)

Thus began the second half of an association with baseball that lasted 40 years. It's covered in Selig's book, "For the Good of the Game."

The subtitle tells you what almost half of the book is about: "The Inside Story of the Surprising and Dramatic Transformation of Major League Baseball."

Selig has come a long way in the baseball world. He was a car dealer in Milwaukee who grew up loving the game. When the Braves came to Milwaukee, he was well-placed to get to know the players a bit - one of which was the great Henry Aaron. The two remain close today. Selig was sad when the Braves moved, and put together the group that purchased the Seattle Pilots in 1970 and brought them to Milwaukee.

The Brewers had some good teams and some great players, like Robin Yount and Paul Molitor. But salaries continued to rise throughout Selig's first two decades as an owner, as the MLB Players Association handed the owners a series of losses in collective bargaining talks. The result was an industry that was bleeding money, at least in some locations.

As this story indicates, Selig and MLB finally got their collective act together. They knocked down some walls of mistrust between the players and owners, and became full partners. Work stoppages disappeared, revenues grew, and the game moved to healthy financial footing. Selig certainly deserves some credit for that, and his efforts are outlined here. He does get a little defensive at times about the criticism that came his way during his tenure as Commissioner. That more or less comes with the job, of course, and it is his book.

Admittedly, this is a side of the game that is not that interesting to those who like balls and strikes separated from dollars and cents. They probably won't pick it up anyway. But there's some insight into the personalities involved, even if there is not a great deal of talk about the players of that era.

The biggest side issue of Selig's era involves steroid use by players. The ex-Commissioner is quick to point the finger at union officials for being slow to allow random drug testing for such substances on the players. Personally, I think management deserves a little more blame in the delay of dealing with this issue, but certainly the players' association lost the public opinion battle when it came to the need for such tests. The strict testing of the past several years seems to have had the desired effect of cleaning up the game, even if we still struggle with the legacy of such players as Barry Bonds and Roger Clemens.

Much credit goes to Selig and co-author Phil Rogers for making this a very readable book. The pages go by quite quickly, and there's only a little score-settling involved. Again, a book like this about the sports business could have been very dry. It's a credit to them that they handled the task of making the story at least easy to take by common fans look relatively easy.

By the end of the book, baseball's revenues have never been better - and Selig certainly deserves some credit for that. He's a little too quick to say the game itself doesn't need any tinkering; the increase in home runs and strikeouts in recent years has taken a little of the action out of the sport. But the spotlight is back on the players and their accomplishments for the most part, which might be Selig's biggest legacy.

Selig established a reputation as that rare sports executive who actually liked to talk to sportswriters and fans. "For the Good of the Game" shows that quality quite well. He did the best that he could, and that turned out to be a big part of the reason for the game's turnaround. And that's why he deserves to be in the Hall of Fame.

Be notified of new posts on this site via Twitter @WDX2BB.
Posted by Budd Bailey at 3:23 PM