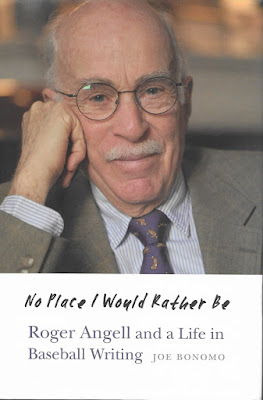 Roger Angell holds a unique place when it comes to baseball and its literature.

It's a sport that celebrates those who follow it with grace - day in, day out. That's part of baseball's charm, of course - a game that is played at least 162 times a year by the best in the business. That makes baseball games more of a companion than an event, and it means that simply showing up, day after day, is the best quality of the chronicler of the game and its seasons.

Angell, though, was different. He was employed by The New Yorker, a magazine that has been setting a variety of literary standards for almost a century. If the publication's story was ever written as a history, Angell would be featured as a veteran fiction editor.

On the other hand, Angell chipped in with some stories on baseball a few times a year, if only to get some sports coverage in the magazine. It was a natural choice, since Angell has been following the game for most of his life. He could make a first-hand comparison between Babe Ruth and Barry Bonds, having seen both play.

Those stories - usually a season-ending wrap-up along with an exploration of some other part of the game - became highlights of the calendar year for some baseball fans. We have Angell's anthologies for reference - must reading, if you haven't explored them yet. Now we have something of a critical analysis of Angell's baseball work. "No Place I Would Rather Be" comes from Joe Bonomo, an English teacher at Northern Illinois University with several credits to his name.

Bonomo quickly says that this is not a book that's anything close to a full biography of Angell, because for the most part he's sticking to the baseball stuff. The author does that, although Angell's early life and final days (he's almost 99 as of this writing) are covering in a more general nature. Mostly, though, we get an analysis of the themes and approach that Angell used in his baseball writing career.

In an era when "inside" coverage is the norm in a sport, Angell was the exception. What he did, particularly in the early days, was to provide an outside perspective of baseball. That means sometimes he sat in the stands like the rest of us, and commented on what we all were watching. Angell did it with art and beauty, and he did it well enough to be named to the Hall of Fame.

It's interesting to see Angell's work evolve over the years. The skills of manipulating the language are still present, but as his fame increased it was apparently more difficult to pull off the disguise as invisible observer. Even so, Angell adjusted his work accordingly to the new circumstances. Home runs are always worth watching whether they are pop flies that hit the foul pole or majestic clouts that are so obviously departing the premises that the batter is only person on the field who needs to move for the succeeding several seconds.

There is something of a risk to writing a book like this. There are lot of excerpts from Angell's writing on display here, running from a few words to a couple of paragraphs. It's something like eating a salad one ingredient at a time instead of having a variety of tastes arrive in your mouth in different combinations with each bite.

Therefore, "No Place I Would Rather Be" works better for those who have read at least some of Angell's works. If you haven't done so yet, go find "The Summer Game" or "Five Seasons." And if you know Angell's work, this exploration of it should keep you interested through its 174 pages.

Be notified of new posts on this site via Twitter @WDX2BB.
Posted by Budd Bailey at 3:12 PM