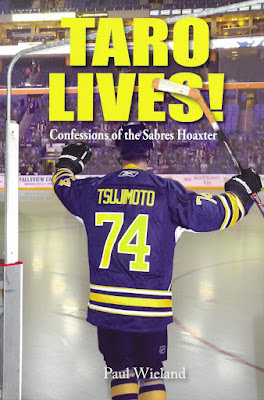 When I worked for the Sabres' public relations department about 30 years ago, I received a phone call from someone who had the same position as I did at another NHL team.

"I can't talk right now. We're having a meeting to discuss our April Fools' television broadcast," I told him.

My friend from the more straight-laced NHL team laughed and said, "Oh man, I am definitely working for the wrong team. We'd never get away with that."

Therefore, this is not going to be the place for a hard-hitting, critical review of "Taro Lives" - Paul Wieland's review of the hoaxes he pulled off over the years.

Besides, my name is on the dedication page; Wieland calls me "his favorite historian." In the pages of the book, Wieland also describes me as "a statistics hawk with a droll sense of humor and a lightning-quick wit." Who am I to argue with such a distinguished judge of talent?

I spent six years working for the Sabres with Paul, and the best part was the chance to work on the April Fools' Day gags. As mentioned in the book, I did come up with the items for the Sabres Shopping Service, such as the Benoit Hogue-ee Sandwich and Wowie Housley Cola (20 times the normal amounts of sugar and caffeine).

I remember writing the release for "Sabre Meadows" in 1987. The team had brought an old ice rink in Wheatfield for a practice facility and turned it into "Sabreland." The news release said the Sabres had decided to start construction on a 67,000-unit house development, complete with an Olympic-sized ice rink and other frills. When someone from the WBEN news department called to interview me about it, my better angels won the argument and I couldn't let him go on the air with it. So I told the guy, "Did you read the release in full? Did 67,000 seem like a lot of houses? And what day is today, anyway?" I could hear the snickering of his co-workers by the end of the call.

This book, then, was a trip down Memory Lane for me. Luckily, these were jokes that went public in many cases, and therefore everyone who was around in that era shared the fun. Therefore, the book has broader appeal than to those who once worked for Paul.

Even so, it's odd to read something of a memoir by a person who has been a friend for about 40 years. I knew some of the details of his life - growing up in Western New York, working at two newspapers and General Motors before landing with the Sabres in 1970, etc. Still, it's quite interesting to read a book like this that fills in so many gaps in his life's story - the formative years of a hoaxer.Wieland became one of the great characters in the lives of those who knew him, appreciating that he never lost his sense of outrage and whimsy while growing older. That was most obvious in the hoaxes he pulled over in various ways over the years.

The most obvious was the one mentioned in the title. The NHL Draft was dragging on and on in 1974, when the Sabres front office decided to draft a player that didn't exist. Wieland came up with Taro Tsujimoto of the Tokyo Katanas, a name that represented the spirit of a franchise that wasn't afraid to laugh at itself a bit. The joke went on for months, and even the team owners were fooled for a while. Taro's uniform still pops up at Sabre games.

The biggest splash came in 1981, when the Sabres announced that they had been declared "America's Hockey Team" by President Reagan. The elaborate release came with a Time magazine cover and a letter announcing the proclamation from Reagan. The story apparently broke two Federal laws, but were quickly forgotten once the powers that be calmed down a bit.

Eventually the hoaxes moved to television. One time Wieland capitalized on the popularity of call-in polls by having the fans decided the starting goaltender through their phone calls. We also had Mike Robitaille ask Christian Ruuttu questions in English, while Ruuttu answered in Finnish. I asked Ruuttu what he said to Robitaille, and he answered, "Things like, 'That's a good-looking sportcoat, but your hair looks ugly.' "

I remember a few of the details of these stories differently than Paul does, but that's fine. The big picture is what matters here. "Taro Lives!" captures a certain innocence in sports that started to disappear in the late 1980s. As the financial stakes increased in the world of fun and games, companies became less likely to take chances that might offend even a small percentage of their consumers. I could argue that we lost a little something along the way when that happened.

In the meantime, I guarantee you'll laugh a lot at this look back at a more innocent, and more fun age in sports.

Learn more about this book on Amazon.com