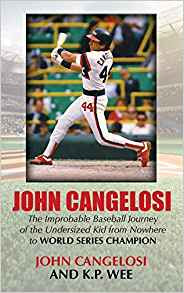 By John Cangelosi and K.P. Wee

Most baseball fans of a certain age remember John Cangelosi. That's probably because he was relatively small.

A few players have done well despite not having an extra-large frame - Phil Rizzuto, Jose Altuve, Dustin Pedroia, etc. But it's difficult. You check in at 5-foot-8 and 150 pounds, the odds are against you.

Cangelosi carved out parts of 13 years in the major leagues, which definitely beat the odds. Now, 20 years after his last game in the majors, he's cooperated fully with author K.P. Wee on something of a self-titled autobiography - even though the book is more of a biography since it's written in the third period.

For those who don't remember, Cangelosi was a long shot since coming out of South Florida, one of the most fertile areas for young baseball talent in the country. He wasn't drafted, but played well in junior college. That led to his entry into the pro ranks as a draft pick of the Chicago White Sox.

Cangelosi first popped up as a pro rookie in 1982 with Niagara Falls, and three years later turned up in Buffalo for the Bisons. In other words, Western New York got to look at him first. No matter where he played, though, he was fast. That translated into stolen bases and infield hits, and he had a lot of both.

Cangelosi was a regular for the Chicago White Sox as a rookie in 1986. Oddly, it was the best season of his career. The outfielder set an American League record for steals by a rookie with 50. He also drove in a career-best 32 runs. From there, Cangelosi got type-cast as a fourth or fifth outfielder. He could help out on defense, draw a walk and steal a base. Accordingly to all who knew him, and many are quoted here, Cangelosi accepted his role without complaint. Some managers appreciated that more than others, so he often had a job with another team after getting cut by the old team. Cangelosi played for seven different squads.

But the next-to-last team was the one that provided the biggest thrill. Cangelosi was part of a World Series champion when he played for the Marlins in 1997. The now-veteran even got to pinch-hit in Game Seven of the Series that year, although he struck out. Cangelosi considers that something of a highlight as well as a reward for his dedication to the game, and deservedly so.

It's a decent start for a book, but the treatment of the story wasn't done particularly well. There are a couple of big problems here.

The first is that it really needed another look by an editor. Material is duplicated quite frequently, and it's easy to become tired of the same old themes. The story is told in chronological order, but some of the anecdotes jump around a bit. For example, Cangelosi offers his all-time team in the middle of the discussion of the '97 playoffs. And some of the quotes from the players really could have been trimmed down to avoid repetition.

The second problem is that Cangelosi is the subject of a great deal of cheerleading from co-author Wee, who I assume put together the manuscript. Just because you are one of the leaders in stolen bases doesn't punch an automatic ticket to the All-Star Game. Just because you hit well in some spring training games doesn't mean you will make the big club in April.

And do we really need a few pages near the end of how Cangelosi hit a few good pitchers well in his career? He ends up with a .250 career batting average in the end.

"John Cangelosi" probably should have been written more than 10 years ago, when his name was familiar to more fans. This current effort could serve as something of an inspiration to someone who literally looks up to other big leaguers, as Cangelosi did. But otherwise, this probably isn't worth your time.

Be notified of new posts on this site via Twitter @WDX2BB.
Posted by Budd Bailey at 4:51 PM