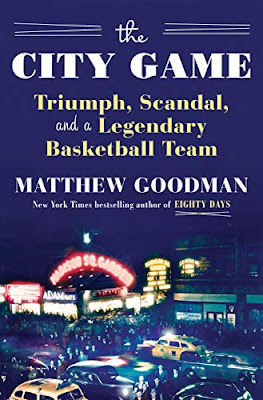 If you check the record book of basketball history, something will strike you about the 1949-50 season. City College of New York is listed as the winner of the National Invitation Tournament, at the time the most prestigious such event in the country. CCNY also is listed as the winner of the NCAA Tournament, which was headed toward the No. 1 event in the game but hadn't gotten there yet.

This is not an error. The Beavers are the only team that won both championships. The two events weren't held at the same time back then, so it could be done.

Yet CCNY is also remembered for something far more sinister. The Beavers were discovered to have been part of a huge scandal that rocked the sport, particularly as it was played in New York City at the time.

There have been other scandals in sports over the years. But in this case, college basketball probably lost its innocence. That's why it's good that Matthew Goodman has gone back and taken a long look at the story in "The City Game."

(Footnote: The title is the same as a classic Pete Axthelm book on basketball in New York, that really put street basketball on the sports map. I'm not sure that was a good idea, but the connection to City College does give the title a slightly different spin here.)

College basketball had a very different look back in the late 1940s, as New York was the center of the hoop universe. Top teams would come in to play New York City's best in Madison Square Garden. (By the way, those out-of-town squads often would stop in Buffalo on the way to pick up another game and paycheck, setting up a golden era for the sport there too.)

But something else was a big part of the basketball scene in New York in that era: gambling. The stands held plenty of gamblers who were willing to be on a variety of aspects of the game, but they concentrated on point spreads. That means that if a certain team was favored by a particular number of points, gamblers would bet on which side of the line that the final score would fall. Goodman provides enough detail that you can almost smell the popcorn in the Garden while reading it.

Mix large amounts of money with a sports event, and the temptation for cheating grows. In this case, the college kids were seeing many dollars change hands while they received nothing, so an offer to keep the size of a victory down under the designated point spread was quite tempting. Several players on New York City teams were offered money, and some accepted it. That, in short, is Goodman's story - the fast rise and fall of the CCNY team.

The Beavers were a good team, one of the best in the country, but not an overwhelming favorite to win titles. The author reviews the principal players for CCNY, to give the story a more personal touch. While other players and colleges that were involved in the scandal are briefly covered, the focus of the book is on the so-called "Harvard on the Hudson." City College was a free school open to anyone who could meet the academic qualifications, which were very high.

Goodman also takes the time to go on a parallel track of a legal investigation into corruption in the New York City police department and other municipal areas. The payoffs were extensive, reaching quite high into the executive branch of government. It's not as interesting as the human side of the scandal, but it's necessary to the story.

Nothing was ever the same once the point-shaving scandal broke. The players involved wore an imaginary scarlet letter on their chests for years to come. CCNY deemphasized basketball, and its coach, Nat Holman, lost his honorary title of "Mr. Basketball" to Bob Cousy later in the 1950s. Assistant coach Bobby Sand, one of the few good guys in the story, couldn't teach for quite a while.

Some of this might be familiar to readers, even though it is 70 years after the face. The subject has been covered in a couple of other books, plenty of newspaper and magazine articles, and an HBO documentary.

Still, "The City Game" remains something of a cautionary tale even in this day and age. Now that the Supreme Court has taken away some of the apparent limits on sports gambling, the temptations for athletes - particularly in college - will be greater than ever in the near future. In other words, there's no reason to think this won't happen again. That gives a book on something that happened around 1950 quite a bit of relevance to today.

Be notified of new posts on this site via Twitter @WDX2BB.
Posted by Budd Bailey at 10:20 AM