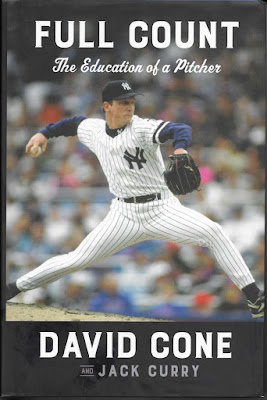 By David Cone and Jack Curry

By the end of his baseball career, you knew David Cone had a book in him.

He had reached the point where he had played with some good teams, won a few championships. took home some individual honors, and earned a reputation as a perceptive interview in baseball circles. Adding to that is that he played in New York for several years (both the Yankees and Mets), and that's never hurt someone's chances in the world of publishing.

It took a while to get this done - a few years short of two decades - but "Full Count" is that book. Come to think of it, this volume is something close to two books in one. No wonder it checks in at close to 400 pages.

Cone was something of a wanderer when it comes to baseball, bouncing from through Kansas City, Toronto and Boston in addition to his stops in New York. He picked up quite a bit of knowledge about pitching along the way, and a good percentage of the material in this book is devoted to that subject. Call it Book One.

Ever wondered what goes through a pitcher's mind when things are going his way? Here's Cone talking at length about the ultimate in that area - his perfect game. It fits in nicely with his descriptions of other key moments in his career, good and bad. The good ones outnumbered the bad ones, which is why he was part of a title in Toronto and a few more with the Yankees.

There are plenty of other subjects covered here. A brief list would include relationships with umpires and catchers, strategies with particular pitches, throwing in crucial situations, etc. I'm not sure there have been better explanations of the art of pitching to this extent before, at least in my reading history.

But will it interest everybody? To be honest, the answer is - probably not. It's almost a little too detailed for some audiences. I have two good friends who are huge baseball fans. The one who was a pitcher in college probably would enjoy these stories greatly. The other enjoys the game more as a fan, and might not be as interested.

Luckily, Cone also has some stories from his years in the game to pass on along the way, roughly in chronological order. That's Book Two. He played with plenty of interesting personalities, and it's good to read about the journey taken in his athletic career. Cone thinks the world of Joe Torre to this day, and even has some good words about working for George Steinbrenner.

There's one other striking point about the narrative here. It's rather obvious here that Cone has been the proverbial immature knucklehead at some points in his life. His guess is that the Royals traded him to the Mets for Ed Hearn - one of the worst deals by Kansas City in team history - was sparked by Cone's lack of maturity at the time.

Cone doesn't go into much detail about some of those incidents, except to say that a couple of things in his Mets days got blown out of proportion and points out that he was cleared of some serious allegations. If you are looking for the full story of those moments, you'll have to look elsewhere. But Cone and David Wells were good friends during their Yankee days together, and it's fair to say Wells didn't hang out with wimps when it came to extra-curricular activities.

Cone has become a nice fit on Yankee television broadcasts since retirement, as he has been a candid and insightful analyst in his time there. You could call "Full Count" a continuation of those duties. Those looking for more than the usual look at the business of throwing a baseball for a living will find much to enjoy here.

Be notified of new posts on this site via Twitter @WDX2BB.
Posted by Budd Bailey at 8:24 PM