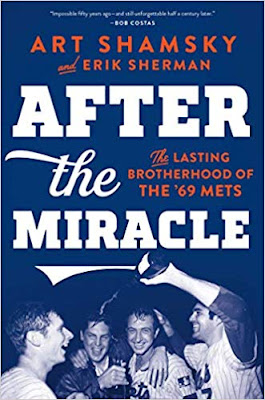 By Art Shamsky and Erik Sherman

The blitz of books about the 1969 World Series Champion New York Mets continues, with a contribution in this case by someone who is well qualified to write the story.

Art Shamsky already had one book on his resume when the Mets outfielder decided to put some memories down on paper. The result is "After the Miracle," which ought to satisfy any fan's curiosity about what it was like to live through that season as a participant.

Shamsky spent that season splitting duties in right field with Ron Swoboda (who by the way has his own book on the '69 Mets coming out this year). He obviously had been thinking about such a project for a long time, because the bookends of the text are devoted to a mini-reunion of players staged in 2017.

In between is a review of the season. For those who are too young to remember or haven't studied their baseball history, the Mets were the laughing stock of baseball from their birth in 1962 through 1967. They showed improvement in 1968 but still finished ninth in a 10-team league. It all made their nearly worst to first rise in 1969 that much more unexpected and spectacular. Sometimes sports fans from other parts of the country don't like New York sports teams because they received an outsized amount of attention for their efforts. But, trust me, everyone fell in love a bit with those Mets if you weren't a Chicago Cubs fan. (Every story needs a villain, and the Cubs filled that role nicely.)

Shamsky spends most of the time reviewing that season, of course, and he throws in plenty of stories about the players, coaches, etc. on the roster. The big games, including everything in the postseason, are covered in detail, and it's nice to here about what players were thinking at the time. By the way, a Baltimore Orioles fan will be a little angry when they read what really happened during a controversial play during the World Series. (No spoiler from me on it.)

It was one of those great years in sport when everything seems to fall into place. Obscure players did heroic things on a regular basis. It was all nicely put together by Gil Hodges, the former Brooklyn Dodger hero who managed the team with skill while commanding complete respect in the locker room.

The author does spent plenty of time talking about how close the team was and how it eventually expected to win. Such an overwhelming experience surely drew the team together for life; they'd be thrown together for the rest of their lives, giving everyone a chance to relive the experience over and over.

It would have been very interesting to hear Shamsky's perspective on what happened after that championship season. The Mets slowly sank from the heights of '69, as some of the inevitable roster changes didn't pan out. Hodges died in 1972, which obviously had an effect on the organization. New York was lucky to reach the postseason in 1973 with a record a touch above .500, and that was it until 1986.

While the season is covered in a satisfactory way, the book picks up steam at the end. Shamsky arranged to have Jerry Koosman, Swoboda, Bud Harrelson and co-author Erik Sherman join him on a trip to see star pitcher Tom Seaver at Seaver's house in California. Seaver was suffering from the effects of Lyme disease, but the group caught him on a good day and obviously enjoyed the get-together. You might recall David Halberstam's book, "The Teammates," on some 1940s members of the Boston Red Sox getting together to see Ted Williams. This has some of that same nostalgic sweetness in it, although it comes in a smaller dose. It's sad that Seaver is unable to participate in what will be a season-long celebration of that team because of his health problems.

It's tough to say how much an interest a 20-something might have in reading about a team from 50 years ago, no matter how universal some themes are. But "After the Miracle" ought to be a great fit for those who lived in the first time.

Be notified of new posts on this site via Twitter @WDX2BB.
Posted by Budd Bailey at 10:48 AM