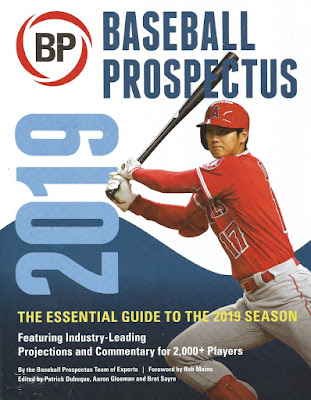 The gang from Baseball Prospectus has been hard at work evaluating players and teams for almost a quarter of a century. At some point, the writers probably have looked at some typical player and said, "What am I going to write about this year?"

That's the quandary that a reviewer must face with trying to evaluate a new edition. Luckily, there are a couple of points to be made about "Baseball Prospectus 2019" that are worth discussing - particularly if you are familiar with the book.

Just to review this series for those who need an introduction, Baseball Prospectus is broken into chapters for each of the major league teams. Those chapters have an essay about some aspect about the team (not necessarily a preview by any means), followed by comments on the top players in the organization. I would guess it hits close to almost 70 players per team. The book supplies the traditional stats that are on the scoreboard at the local ballpark, but also some numbers that aren't exactly common. There are explanations of each of those statistics in the book if you care to find them. If not, it won't get in the way. There are a few essays in the back for the deep thinkers in the statistical crowd.

Now let's get to the changes. The first is something of a throwback. A few years ago, BP reduced the point-size of the type of the player comments slightly. This no doubt cut down on the number of pages and thus saved on printing costs. It also was noticed and was the subject of some complaints, which led to a bigger size of type the next year.

But this year, the type is again smaller. And it's tougher to read. After reading some of the player comments in the 2019 edition, I grabbed last year's book for comparison, and the difference is obvious. That may not sound like a big deal, but I found my attention span lessened with the small print. This is not the way to engage a reader, of course. Could some of the players been reduced to one-line comments in the back of each chapter, joining several other fringe prospects in order to create more room? You'd have to think so.

I should mention that both the 2018 and 2019 books are about 596 pages, yet this year's edition checks in at a quarter-inch thinner even though according to the covers it has fewer player profiles. The printing business sure can be complicated.

The second may have something to do with the announcement at the front of the book. In the foreword, Rob Mains reveals that a group from the BP's senior staff has bought the operation - which includes the book, a busy website, and any other projects that come along.

The owners may have put out an order to be a little more professional in the writing, and be a little less, well, snarky. Some of the comments over the years have had a little bite, and the "tone it down" order wouldn't be a shocker. The person who wrote about the Texas Rangers' players still has a "colorful" writing style this year. Otherwise, the comments frequently are written in a non-traditional way, but lack some of the bite that previous descriptions have contained. This may make a reader happy or disappointed, depending on the viewpoint, but the fact that it has happened is worth noting. Me, I miss the old way a bit.

Otherwise, though, this is a solid effort as usual. BP does an excellent job of identifying top prospects before you've heard of them, and offers an impressive dose of realism about where almost everyone on the organizational roster stands entering 2019. It's a great companion piece for watching a game on television (it's a little heavy to carry to the park), and naturally comes out of the bookcase whenever your favorite team makes a six-player trade with someone like Baltimore. (Sorry to pick on the Orioles there, but most of the guys I knew on that roster are gone.) I still wouldn't call it essential for preparing for a fantasy draft - there are better resources in those limited areas - but that's fine.

It's tough to give this a perfect rating under the circumstances, but every serious baseball fan should take a look at this for purchase. The BP staff continues to fill up the front offices of major-league teams, and it's always good to learn from the observations of such smart people.

Be notified of new posts on this site via Twitter @WDX2BB.
Posted by Budd Bailey at 5:19 PM