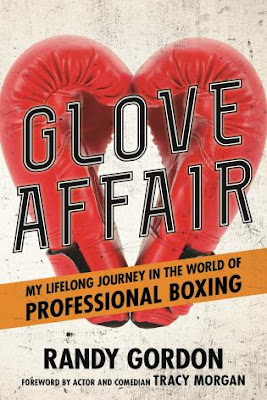 Sometimes a young boy is asked what he plans to do for a living when he grows up, and he gets it right.

Randy Gordon was one of the lucky ones.

Gordon was taken with boxing almost right from the start. He actually skipped school the day that Rocky Marciano died in an airplane crash to talk about the tragedy with Nat Fleischer, the editor of Ring magazine - at the time, boxing's bible. It took a while, but Gordon got into Fleischer's office, had a nice chat with him, and was told by the publisher to call him when he was done with college. Fleischer would have a job waiting for him.

That's how Gordon got started in the boxing business. He's still at it all these years later. Finally, he has typed out some of the stories he's collected over the years into the book, "Glove Affair."

Gordon's career has done a little winding over the years. He did graduate from college, and got that job writing about boxing. Gordon also became the editor of Ring, and did some television commentating on some good-sized fights on networks.

Then there was the most unusual career move of all - he became Commissioner of the New York State Athletic Commission. That's a big job in the boxing world, mostly because New York City traditionally has hosted some of the biggest fights in the world - at least the ones that don't land in Las Vegas. Gordon now does some radio work with former heavyweight contender Gerry Cooney.

This is not a traditional autobiography - more of a collection of stories in no particular order. Perhaps the most interest will come when Mike Tyson's comes up. The heavyweight champion of the world still has the ability to fascinate us, even years later. Gordon devotes plenty of time to his role when Tyson tried to dump his old manager, Bill Cayton, in favor of the legendary and notorious Don King.

Alexis Arguello, another boxing great, gets plenty of ink here too. Gordon met him by chance when Arguello was walking into an event, and the two became fairly close. Gordon had the chance to chat with Muhammad Ali a few times, and The Greatest still fascinates. The author also recounts the tale of Billy Collins Jr., who was essentially murdered when some shenanigans took place with his opponents' gloves. Gordon is still furious about it, these many years later, as well he should be.

I suppose the rule here is that the fighters are interesting and the hangers-on are sometimes scoundrels. There's a funny story about how Gordon kept "running into" envelopes filled with money when he visited a boxing convention in Mexico City. And there's an odd episode involving an employee of the Athletic Commission who had figured out a way to stay on the job even though no one seemed too sure what he did - besides leak information to the media. Gordon figured out a way to get rid of him through a rather elaborate scheme.

The lack of continuity is a bit of a problem here. There are some references to other parts of Gordon's life that come up as asides that could have used more explaining. A little more editing might not have been the worst idea in the world, either.

Overall, though, "Glove Affair" is a quick and entertaining read. Gordon comes off credibly and as someone who loves the business and wants to see it work in a proper way. Boxing isn't what it used to be, of course, but those with an interest in the sport will like it.