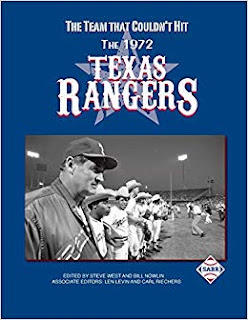 I am back in the Society of American Baseball Research (SABR) after more than 30 years, and during that time the organization has prospered. This is a group of dedicated baseball fans - and that's an understatement - who deeply care about such matters as Joe Jackson's eligibility for the Hall of Fame so many years after he was banned from baseball.

SABR always had some interesting publications, and now they are able to issue them in an up-to-date form. In other words, the group can put out its books in an e-format such as Kindle, and give it away. In this case that's a $30 savings over an actual paperback copy of it, so it's a nice bonus.

This offering is about the 1972 Texas Rangers, and it is very accurate to say that they were "The Team That Couldn't Hit." Toby Harrah had the best batting average among the regulars at .259. There was one other starter who cracked the .250 mark - catcher Dick Billings. Three regulars were under .225. If you were thinking there might be some talent on the bench, well, 10 players who suited up in Texas uniforms that season were under .200. So they got the title right.

And who was the manager of that team? The answer is a rather unlikely one. Ted Williams is considered one of the greatest hitters of all time, maybe the single best hitter. Yet he couldn't do much to help this team hit more than .217, one of the worst such numbers in history. Some of the players on that roster with name recognition to a certain degree were Frank Howard, Lenny Randle, Elliott Maddox, Don Mincher, Dick Bosman, and Don Stanhouse.

At first, it's easy to wonder how a book on this team and its poor season filled up 404 pages. But pick it up and start reading, and you'll figure out why. After a couple of introductory chapters on the team's past, the book starts to go through the roster, one by one, with good-sized biographies of every player and coach. Other people, such as front office staff, ownership and the media, are covered as well. My guess is that this is part of the SABR biography project, which tries to compile as many bios as possible of those in the game. It doesn't stop at 1972, but rather covers an entire career and in some cases life.

That means a bunch of different people wrote for this book, since the workload for a solo effort would be staggering, and the results are naturally uneven. The stories that feature long interviews with a given person in the biography are easily the best; I'd bet a long-forgotten reserve from the past was happy to be remembered at this point. But some of the stories are rather dry, coming off as more scholarly rather than written for a mass audience.

The book also contains other features devoted to the team, such as chapters on big games and a listing of every game of that season with a couple of sentences of recap. It's nice to have them here.

This sort of book is really difficult to rate, because much of the material in the biographies has little to do with the '72 Rangers. Therefore, most people will not have much interest in reading so much about that team. However, if you followed the Rangers closely back then, there is little doubt that you will thoroughly enjoy "The Team That Couldn't Hit" and have it on your bookcase forever. In either case, the amount of work and scholarship that went into this publication is admirable. We will see what else is coming down the road from SABR in the future, and look forward to its arrival.

Be notified of new posts from this site via Twitter @WDX2BB.
Posted by Budd Bailey at 1:39 PM