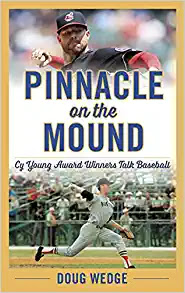 The concept is a simple one: track down 10 pitchers who have won a Cy Young Award, have a nice, long conversation with them about their careers and that special year (or two), write up the results, and turn it into a book.

That's what Doug Wedge did in his book, "Pinnacle on the Mound." It sounds simple enough for a project, and it is. But there's a twist that pops up along the way - not a fatal one, perhaps, but one that left me a little confused.

The first job is to pick the 10 Cy Young winners for the book. For the most part, Wedge goes back into time for his trophy-holders, as nine out of 10 are retired. But the biggest stars of the era are omitted, as only one Hall of Famer (Dennis Eckersley) is included.

That leaves out such pitchers as Greg Maddux, Randy Johnson, Roger Clemens, etc. I would guess the author at least tried to talk to those guys. But he still found some good talkers to cooperate - Jim Lonborg, Mike McCormick, Randy Jones, Ron Guidry, LaMarr Hoyt, Jack McDowell, Barry Zito, R.A. Dickey, and the still active Corey Kluber (his interview was done via email).

In some ways, it's better to find pitchers who were good for only a while but couldn't be considered superstars. The "others" - especially now that they are retired - have a good perspective on what went right and what went wrong. Most had some adversity to overcome along the way, and most had some valuable help from others in that process. They are good talkers, although they let a few R-rated words come out in some cases if that's a problem for you.

The stories in each pitcher are fine and professional; they remind me a bit of profiles that might be in Baseball Digest. The ones that work best are those about pitchers who you might not know much about. For example, I can recite the highlights of Lonborg's 1967 season in Boston, but didn't know too much about Randy Jones and his techniques. There's a conclusion at the end that tries to lump everything together. It's hard to say that was necessary, except maybe to get the book past 200 pages.

So here's the odd part. Wedge - the author of a couple of other baseball books - lists the dates that the interviews were conducted in the back of the book. They start in 2014 with McCormick, and end in 2020 with Kluber. That means some of the material is seven or eight years old. Now, the memories of seasons past are going to remain the same, so that part isn't really a problem. But the stories were written shortly after that, and written as if they were going to be read immediately ... and not seven years later.

For example, there's a sentence that reads "Dr. Lonborg recalled moments and instances nearly 50 years prior with insight and details." That was true in 2015, when the interview was done, but not in 2022, when it was first read by the public. Without the date of the interview included in the story, it all seems a little confusing and odd. It would have been easy to correct, too.

"Pinnacle on the Mound" is a little expensive at $32 list, as it can be breezed through relatively quickly. It's not a bad book by any means, and those with an interest in the subject will enjoy it. A few more interviews, though, would have helped make it a better value.