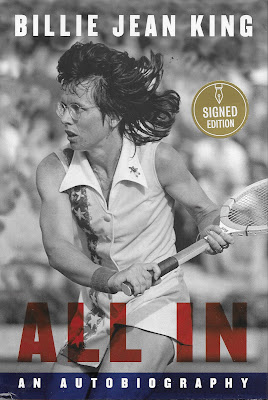 How many athletes really mattered in the 20th century? Not too many. Jackie Robinson, absolutely.  Muhammad Ali, certainly. Babe Ruth, perhaps (mostly for starting the rise of spectator sports).

And Billie Jean King, yes, no doubt about that.

When King first came on the scene in the early 1960s, women played second fiddle to men in almost every way when it came to sports. Now, about 60 years later, conditions have changed for the better in many ways. It's not quite perfect, but women are much more able to fulfill their athletic potential than they used to be. King might the single most important person in that fight - although you probably could make a case for Senator Birch Bayh, who wrote the Title IX legislation that allowed women to be a much bigger part of  college athletic departments.

Still, King became the symbol of the rise of women in sports. It was quite a ride, and it's about time she wrote a full account of her fascinating life. That story is called "All In."

Maybe it took a pandemic for King to stay in one place long enough to write this book. It's been said that the first draft was more than 800 pages long, which isn't surprising considering what's happened to her over the years. It was trimmed down to a little over 400 pages for publication, and there's not much filler to be found anywhere.

King has often been an outsider in many ways, particularly in tennis. She wasn't one of the country club kids who grew up playing with best equipment and fancy white clothes. No, Billie Jean learned the game in the public parks of Long Beach, California. She was taking part in regional tournaments around the country in relatively no time at all, playing in the U.S. national championship at 15 (later called the U.S. Open) and won the doubles title at Wimbledon at 17. By the time King was 19, she was a finalist in England's grand slam event. She went on to win at Wimbledon six different times.

Along the way, King noticed a couple of things about tennis that, well, annoyed her. One was that almost everyone seemed as white as the clothes that were more or less required on the court. The other was that women were playing for scraps, relatively speaking. Most of the players were amateurs (which mostly translates to keeping the money away from those who earned it), and the men at least survived by receiving under-the-table payments. The best women were barely scraping along. Some top men's players were playing professionally, but that option was not available for women.

When the top tournaments started to allow pros, King played a huge role in organizing a women's pro tour to capitalize on the new rules. She had power as one of the world's best players, and she used it. Now the top money-earners in women's sports all come from tennis, and they are taking in unimaginable sums by 1968 standards. King went on to pile up 12 Grand Slam singles titles, and 27 more in doubles play.

That's the good start to an autobiography, but there's more ... a lot more. In hindsight, her match with Bobby Riggs in 1973 caused an uproar that must be unimaginable to those who lived through it. And then there is the personal life, which at times has been more public that she would have liked. King's stories about having an abortion and having an affair with a women while married to a man became news in awkward ways.

It's all taken a toll, and not just a financial one - although she admits to losing millions through cancelled endorsements after news of the affair broke. King has dealt with an eating disorder among other issues. But she has gone through it all and reached the other side in a much better place. No more lies, no more deceit, much more honesty and happiness. We've made some progress in numerous areas over the past 50 or so years, and King deserves to take a bow - or at Wimbledon, a ceremonial curtsy -  in recognition of her achievement. The one bit of news in the book is that King revealed she had married long-time partner Ilana Kloss in a ceremony presided by former New York City mayor David Dinkins.

There are a few surprises besides that social item that pop up along the way. For example, you might have expected that the fight for something approaching equality in women's tennis picked up some opponents. Two names jump out here - Arthur Ashe and Margaret Court. Ashe and King seemed to reconcile their difference later in life, while Court comes off as afraid of rocking the boat when she had a relatively good life under the old system.

While King always has been happy to help a cause that she believes in, there are certainly times in her life when she probably took on more than she could handle. That's most obvious in the immediate aftermath of the Riggs match, when King was involved in the start of World Team Tennis, the Women's Sports Foundation, and womenSports magazine. Considering that she was still playing more or less full-time at that point, perhaps a little more selectivity in time management would have been helpful. But King probably can't be blamed for seeing an opportunity in the cultural shift of the time after years of waiting for it, and trying to do as much as she can to capitalize on it.

The elephant in the room for some regarding this book is that King is part-athlete, part-activist. She has a mind and a body, and they both work. The book is far more than a look back at victories won and titles earned, although there's plenty of details on those matters. It's all part of the same package. Some aren't going to like her politics and will dismiss this to a certain degree for that reason.

Most, though, will realize that King by any definition has had few dull moments in her 80 years on the planet. Now through "All In," we can read about what she was thinking along the way and in hindsight. It's a keeper.