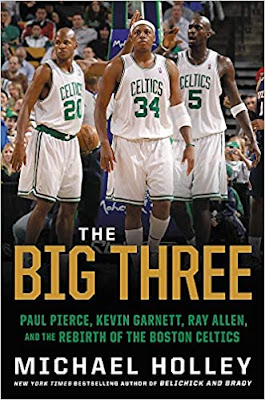 One of the first times that the phrase "Big Three" came up in sports was in the late 1970s. It was used to describe the top defensemen of the Montreal Canadiens. Larry Robinson, Serge Savard and Guy Lapointe were three great blueliners, and they could play indefinitely. The trio was a huge part of four straight championships in that era.

Fast forward a while, and "The Big Three" came up again - this time in basketball. The Boston Celtics collected three Hall of Famers on the same roster, and it helped them win a championship in 2008 and come close two years later.

How did they collect that talent, and what was that era like? Those are the basic questions involved in the book, "The Big Three." Author Michael Holley does a good job of answering them, too.

The Celtics are one of the most historic franchises in the NBA, mostly because of their success in the past. Boston had an amazing run of 11 championships in 13 years in the 1950s and 1960s, and they added to that total in the 1970s and 1980s. But hard times, and perhaps the law of averages (it's easier to win in a 10-team league than a 30-team league) eventually caught up with Boston after that.

The Celtics handed the keys to the car to Danny Ainge, part of the good times of the 1980s. His goal was to collect pieces that would help the team improve down the road. Mostly that was in the form of draft choices and useful contracts. Sometimes the guys with the MBAs are as important as the players in the NBA. Still, the team won only 24 games in 2006-07, and star player Paul Pierce was getting sick of losing.

At that point, Ainge was ready to strike. Kevin Garnett and Ray Allen were around 30, and had never won anything. They were anxious to change that last part. Ainge swung two trades to acquire them, and Boston was in business. The Celtics added The Big Three to Rajon Rondo and Kendrick Perkins for their starting lineup, and the team went on to win 66 games and a championship.

As you might guess, that started some copycat transactions in the rest of the NBA. The Miami Heat added LeBron James and Chris Bosh to Dwayne Wade to form their own Big Three. James had a similar experience when he returned to Cleveland, playing with Kevin Love and Kyrie Irving. You can fit three stars under the salary cap with some creative accounting, filling out the roster with bargain players and youngsters.

It's not easy to do that on court, though. The stars are used to taking the big shots and playing the big minutes. Someone - in the Celtics' case, Allen - has to get used to the idea that he won't be a top option at crunch time. Holley does really good work in showing how everyone on the Celtics' roster bought into the idea, because they wanted a championship on their resume. The good feelings lasted through 2010. An injury to Garnett essentially ruined the chance at a repeat in 2009, and the team fell just short in losing to the NBA Finals to the Lakers in 2010. The group hung on for a couple of years. Then Allen left as a free agent for Miami in 2012, and Garnett and Pierce were traded to the Nets in 2014. Boston has been OK since then, but has not returned to the finals.

It's an interesting story of how to build a winner in the modern NBA, and Holley talked to everyone to find out how everything came together. The book has a ton of little details about how the team operated. There are stories from owners, executives, coaches and players along the way, and the pages go by quite quickly - a good sign.

About the only drawback to the book is that it took some time to be written. We're coming up on 14 years since the Celtics' last championship. Most of the players - including the Big Three, of course - are retired, and the executives have moved on to other things. The building of a winner also is a more interesting process than how that championship team slowly unraveled after the celebration. In other words, the book peaks when the team does.

Even so, Holley's book serves as a supplier of good memories about a championship team as well as a course on NBA management. In other words, even non-Celtics fans ought to find this worth their time.