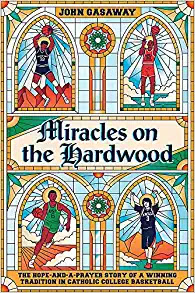 College basketball fans probably have noticed something odd and interesting about their favorite sport. Catholic colleges and universities probably punch over their weight, as they say in boxing. In other words, they've had more great moments in basketball than in any other sport.

Think about it. The list of Catholic schools with a long tradition is a long one. Consider such institutions as Villanova, Gonzaga, Georgetown, Loyola (Chicago), St. John's, Providence, Notre Dame, Marquette, Dayton, DePaul, Saint Joseph's and St. Bonaventure. They've all had some great moments in the sun.

If there's a common denominator there, it's that basketball is their best sport - the one that draws them national recognition. The outlier is Notre Dame. As for most of the others, they tried playing football at some point but realized they couldn't compete at the sport's highest level. But in basketball, you only need to recruit a few good players at a time. Against the odds, these schools have done this - some better than others, of course. But all have had some Glory Days over the years.

I suppose you could argue that the success is something of a carryover to the founding of the nation's universities. Many of them started as small, private schools in the Northeast and Midwest. That tradition didn't carry over to much of the South and the West (say, west of the Mississippi River). So it's a two-tiered system in a sense, and it's kind of nice that the basketball tradition has carried over. Maybe the perfect moment for these schools came in 1985, when three of them - Georgetown, Villanova and St. John's - all made the Final Four from the Big East Conference.

Gasaway could have written a ponderous book with all sorts of religious angles and implications. Instead, he mostly sticks to basketball - and that was a great decision. This reads like a book of selected highlights in college basketball history - that just happened to involve players and teams from Catholic schools. What's more, the book is so well researched that any reader is sure to learn something about basketball and its history. And I do mean any reader.

For example, Bill Russell's college career comes across as something close to underrated - in spite of two national championships at San Francisco. He essentially revolutionized the game while playing the Dons, with his remarkable skills above the rim. Yes, Russell eventually became the greatest winner in NBA history (11 titles in 13 seasons), but his contributions become even greater when outlined here. There's a great story about how an official waved off a spectacular dunk by Russell ... because he had never seen such a player before, and he didn't think it could possibly be legal.

Then there's the case of the NIT and the NCAA tournament. Sometimes it is mentioned that the NIT was equal in stature to its big brother, but Gasaway shows how it happened. The Catholic schools of the 1950s felt more comfortable traveling to New York City for the NIT if they had a choice - fewer classes missed, etc. It was a tradition that continued through 1970, when Marquette opted out of an NCAA big because of a disagreement about seeding. It's easy to look back now and talk about the history of teams that won NCAA titles in the 1940s and 1950s, but the best teams didn't always compete in those events.

Gasaway goes all the way back to players like George Mikan and Bob Cousy. He finds new stories about them and others, including personalities like Al McGuire. Heck, Loyola Marymount's moment in the sun even gets a chapter. The book also has some interesting if now forgotten anecdotes about the slow path of integration into the sport. The author not only has taught basketball analytics at Columbia (where were those classes when I was in college?), but he has a PhD from the University of Illinois. There are a few words that I needed to look up, so you'll feel smarter after reading this.

This is a book that feels like it has a rather narrow audience. Some younger readers might not care too much about the early days of college basketball. Along those same lines, the stories of the teams in the 2000s aren't quite as interesting - partly because there haven't been as many success stories, and partly because we're familiar with the rise of Villanova and Gonzaga.

Overall, though, "Miracles on the Hardwood" fits a niche nicely. It is better and more readable than I expected it to be - a delightful trip showing how - in part - we got to where we are today.

Read more about this book from Amazon.com. (As an Amazon affiliate, I earn money from qualified purchases.)

Labels: Review: Miracles on the Hardwood (2021)