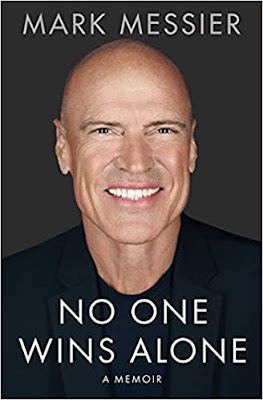 By Mark Messier with Jimmy Roberts

An unusual book, "No One Wins Alone."

There are all sorts of biographies, sports-related or not, out there. This one is simply different in some ways.

Mark Messier's memoir was anxiously awaited by many. He's all over the NHL record book, a personification of the term "power forward" in pro hockey. Messier was big, strong and fast - a matchup nightmare for most players and teams.

The center has two giant checkmarks on his resume that make it difficult to tell the story of hockey history without him. Messier was a big part of the Edmonton Oilers' dynasty of the 1980s. Wayne Gretzky was so good, of course, that it was difficult to get a fair share of attention. But players like Messier, Jari Kurri, Paul Coffey, etc. were good enough to skate into the Hockey Hall of Fame without a checker in sight.

Messier also was part of one of the most memorable Stanley Cups in history. He was acquired by the New York Rangers to lead the team to a championship. Mark did that in 1994, ending a fabled 54-year drought. He'll never be forgotten in New York for that. Messier is the only player to captain two teams to the Stanley Cup, and his uniform number (#11) has been retired by both teams - and rightfully so.

Messier picked up the reputation as hockey's greatest leader along the way, and there's little doubt it is well-deserved. One look was probably enough to get teammates to try to skate through the boards when necessary. A leadership award in the NHL was named after him around 2007.

Messier and helper Jimmy Roberts have taken the highlights of Mark's hockey career, and used that as the foundation of the book. But there are tips along the way about leadership, giving examples that came up during the course of the career. So it's not a straight autobiography, but it's not one of those books that coaches write for business audiences after they've won a title or two.

Does it work? That's a tough question to answer.

Certainly hearing stories about those great teams is interesting. The tales can lead to some good points along the way. For example, Messier writes about how he used to go out of his way to make new players feel welcome. He knew how things worked when teams thrive, and he tried to duplicate that atmosphere in future stops on the NHL trail.

Still, there's something missing along the way. Messier almost completely avoids his non-hockey life here. His wife and their children pop up at the end, as does a child born out of a different relationship that lives with his mother. There are references to less-than-admirable moments in his life, but not many details about them. It's surprising that no one gets called out for poor behavior, even if it is anonymously. All of his teammates are his "brothers," as he puts it, although there must have been some bad apples along the way.

On some level, "No One Wins Alone" meets its goal of discussing his life as a hockey leader. Still, it feels like there's a bit of a hole in the middle. Messier's fans will enjoy it a lot, of course, but the book might have been better with a touch more personal information.