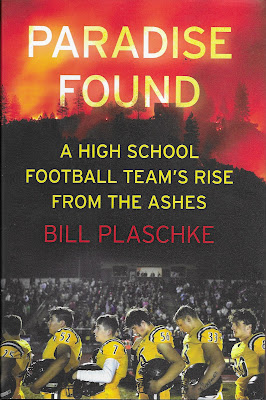 The first and last time that many of us knew anything about Paradise, California, was on November 8, 2018. An enormous wildfire ran through the town that was located in the hills north of Sacramento. Not only did it kill 86 people, but the fire wiped out the possessions of almost everyone in town.

The video of television reports was quite memorable, as much of Paradise was gone. The stories lasted a few days, and then the reporters went home. That happens, naturally, but the departure can still leave a long-term curiosity about how the residents of such a disaster site did in the weeks and months ahead.

One reporter, who hadn't been on the scene at the time, did show up later on. He's Bill Plaschke, the brilliant columnist for the Los Angeles Times. Plaschke received a tip that there might be a good story in attempts to revive the football program the following year - no small task considered players can scattered like and due to the wind because of the fire.  The writer went back a few times too in the months after that.

That led to a series of stories about the Bobcats' rebirth, and that in turn led to a book. "Paradise Found" is its title, and it - as you might guess - quite a story.

Start with coach Rick Prinz. On November 7, 2018, he was planning for his team's appearance in the sectional football tournament later in the week. A day later, he - like everyone else - was trying to put his own life back together after the fire. The game was cancelled, and eventually his thoughts turned to the 2019 season. But how could he do it? The facilities were in terrible shape; the team didn't even have a football left. The players were forced to scatter to available housing, mostly in other towns. Some of those who stayed literally didn't know where they might be sleeping on a given night, or where their next meal was coming from. Paradise's population went from about 26,000 to about 2,000 almost overnight.

Still, it's fair to say that everyone in the entire town needed a diversion from the on-going horrors involved in rebuilding - particularly the players. Prinz thought he could provide one, and called his first spring practice near the Chico (the biggest city in the area) Airport. It was on a field that was hardly smooth, and the players didn't have uniforms. But that's OK - Prinz didn't even have a football. His roster, which was 76 the previous year, was down to 22 - in other words, one for every position, period.

Many of the players' stories on the day of the fire are similar. Most of the kids had to check in with family members to decide a course of action , which mostly consisted of how to evacuate out of town as quickly as possible. Mostly, they had to get on the roads out of town, which for the most part were jammed with cars and often surrounded by fire. Then the stories diverge, since every young man has different circumstances in his life. Most of them, though, craved the normalcy that playing football might offer.

Slowly - very slowly - things got better for the team and its members. The squad found some footballs. Some players moved back to Paradise. Everyone settled into something of a routine that was anything but routine. The start of the 2019 season arrived, and the Bobcats were ready to go - more than that, actually. They won their first game in a contest that was more about healing than touchdowns for all concerned, including the fans, and the year went on from there.

There's enough drama here to fill a dozen Hollywood productions, and Plaschke's writing stays out of the way and lets the story play out on its own merits. It's easy to get caught up in the team and its run to daylight.

There is one little nagging item here that came up while reading the book. High school football seems rather important to Paradise. Is it "too" important? That's hard to tell from a distance. There were a couple of troubling comments about the school on Google reviews that I found by accident - "So many things happen with the football players that the school and principle just let slip under its nose" and "At least Ridgeview (H.S.) did what they could with what little budget they had to increase the learning quality instead of pumping it all to football and Leadership."

I didn't go to a high school that centered the social calendar on football games, but I have learned to wonder about the priorities of such places. The book "Friday Night Lights" took a long look at such schools and towns with a critical eye, and it wasn't too pretty at times.  The team members in Paradise received some breaks and benefits of the doubt on such areas as grades and attendance, and that seemed appropriate under the circumstances. A little more troubling is the ease in which the players managed to hide injuries, including concussions, from authority figures along the way. It might have been nice to have seen more views of the big picture of what was going on from above.

Those are big issues, of course, but Plaschke made the long trip from Los Angeles several times mostly to find out about the football team and not the sociology involved. He hoped he had found a good story before that first trip, and he was right. "Paradise Found" works nicely as a tribute to the healing powers of sport when the world has crumbled around its participants. Let's hope all aspects of the efforts to rebuild lives in that town continues in the future.