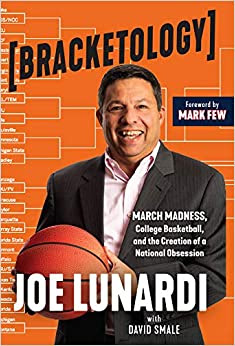 By Joe Lunardi with David Smale

Basketball fans have learned a new word over the past several years: bracketology.

If you were trying to define it, you'd say it is the study of the placement and seedings of the 68 teams in the NCAA basketball tournament - although it's usually associated with the men's event and not the women's.

ESPN popularized the word. After all, it always has plenty of time to fill during games and shows involving college basketball in season. It found the right guy to follow such things in Joe Lunardi, America's leading bracketologist. That sounds like he should be examining fossils in the Middle East instead of basketball records in his Philadelphia-area office, but the latter actually is correct.

Lunardi takes his work quite seriously while having a laugh at his own expense. He's helped popularize the run-up to Selection Sunday, as fans of teams across the country can't wait to see if their favorites will be going to the Big Dance, who they might play, and where the game will be.

That's all well and good. That leads to another question. Is there a book in this story? Lunardi and co-author David Smale gave it the old college try (what else?) in "Bracketology."

As you might have guessed, this is not a particularly long book. There are 268 pages, and there's plenty of white space between lines of type. In other words, if you don't get through this in a few days, you probably are a busy person. And it should be noted that one of the chapters consists mostly of testimonials from those in the basketball business (coaches, administrators, broadcasters, etc.) about what a good job Lunardi does and how he increases interest in the game. That's almost 30 pages that you probably don't need to read.

Otherwise, Lunardi's story meanders along like something of a winding river. Chapters are devoted to the tournament itself, the history of the brackets (shorter than you might think), ESPN's role in popularizing the game, and his story of how he filled a niche that no one really knew existed. But the titles of said chapters are mere guides to launching points of areas of discussion. It's not particularly organized, but this isn't rocket science - it's bracketology.

Lunardi does make one very good point along the way about his process. He does not issue his opinions reach the field of 68. He issues his beliefs on what the selection committee will do with the data at hand. There is a difference there. Lunardi has kept up with the changes in how teams are considered over the years, and it's certainly helped him be more accurate. It's a little surprising that he doesn't spend a great deal of time on particular seasons, when a team was a surprise choice or stunning omission.

Some of  Lunardi's best points come in the final chapter, when he offers some ideas on how to improve the process. For example, Joe thinks a mid-major team that has had a very successful season (20+ wins) deserves the chance to play in the NCAA tournament over a power conference team that couldn't even climb over the .500 mark in conference play. It's a good argument - if your team goes 7-9 in the conference, does it really deserve to play for the national championship? He also would add four more teams to make it a 72-team field, and add a couple of more double-headers on Tuesday and Wednesday at the start of the event. It's a reaction to an increase in the number of schools that play Division I college basketball now. He's got a case, although personally I think the NCAA should hold the line at 64.

Lunardi also believes that the big schools at some point will want to figure out a way to cut out the really small schools from such conferences as the Patriot League or SWAC. We both agree that such a move would take away some of the charm of the tournament.

"Bracketology" figures to have a limited audience because of the subject matter. But at least Lunardi comes across as good company, so getting to know him a bit in a literary way makes this fun enough to be worth a look.