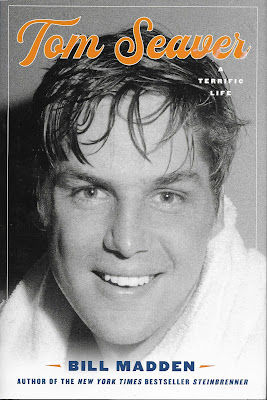 I waited about 10 years for someone to get this right.

Back around 2011, I read a biography of Tom Seaver called "The Last Icon." It was that rare book that I panned here, as I try to avoid books that aren't worth my time. The problem with that literary effort was that it was simply too fawning. In short - don't tell me why he's great; show me why he's great.

Now I've gotten around to another biography of Tom Seaver, and I'm pleased to report that Bill Madden gets it right. "Tom Seaver" is a solid piece of reporting and writing.

If you need much of an explanation about Seaver's contributions to baseball, you either are too young or don't care about history. "Tom Terrific" certainly is a candidate to be rank as the greatest pitcher in baseball history, depending on your standards for such matters. As it is, Madden - the veteran baseball writer for the New York Daily News - points out that he finished his career with 300+ wins, 3,000+ strikeouts, and an earned-run average of under 3.00. There's only one other player in baseball history to do that, Walter Johnson. In other words, Seaver isn't in a class by himself, but it sure doesn't take very long to call roll.

Seaver grew up in Fresno, California, and wasn't much of a prospect in high school. But his body soon filled out, earning Tom a scholarship at Southern California. He soon became a member of the New York Mets, a franchise closely associated with losing and losers at that point. Seaver changed everything, demanding excellence from himself and his teammates. Tom was the focal point of one of the great sports stories of the century, the Mets' World Series victory in 1969. Everyone loved those underdog Mets, and everyone loved their leader.

Seaver continued his success throughout the 1970s and into the 1980s. He bounced around a bit in circumstances that need a book, this book, to explain. But he traveled to Cincinnati, bounced back to New York, landed in Chicago, and finished in Boston in 1986. It took as little time as possible for him to reach Cooperstown, receiving one of the highest percentage of votes from the baseball writers in history.

Madden has some advantages when it comes to the story. He covered baseball in New York for much of that era, to the point where he personally told Seaver that the pitcher was headed to the White Sox in a bizarre combination of events. Madden has plenty of sources on what happened behind the scenes with Seaver. He also obtained some quotes about the pitcher from some of his famous teammates.

It's interesting to note that not all the words about Seaver are praise. It sure sounds like he didn't suffer fools easily, and could be a big testy in certain circumstances. For example, Tom apparently didn't think Yogi Berra was a managerial genius. On the other hand, Seaver comes off as extremely thoughtful on and off the mound, and as very loyal to the friends he gained along the way. This all goes by relatively quickly, checking in at under 300 pages.

The book ends with some poignancy on a couple of levels. He suffered from dementia in his later years, and died on September 3, 2020. My guess is that the last paragraph was included at virtually the last second before its publication later in 2020. It's also appropriate to read this book in late 2021, after the news that Gil Hodges had been elected into the Baseball Hall of Fame. Seaver and Hodges are forever linked as star and manager of the '69 Mets, and they also are two of the most beloved figures in New York's National League history. Now they'll be together in Cooperstown.

It's tough to call this sort of book groundbreaking or revealing. There are also a few typos along the way that probably should have been caught; baseball fans can be amazingly intolerant about such things. It's simply nice to have "Tom Seaver" on the shelf of the library, so that others down the road can learn about him. Just make sure you get this particular biography.