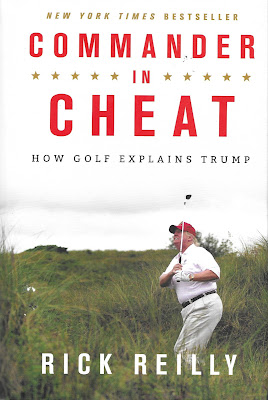 The first question about Rick Reilly's book, "Commander in Cheat," is a basic one. Does it deserve to be put on a blog that reviews sports books?

The pedigree is a good one. For the younger readers out there, author Reilly might have been as good as it got in the sports writing business during his 23 years with Sports Illustrated - back when SI matters. He wrote a back-page column for 10 years from 1997 to 2007. Reading it was usually one of the best parts of a sports fan's week. Reilly could write funny, smart, poignant and funny when needed. Funny is mentioned twice because it's difficult to bring humor to sports writing on a regular basic, and Rick did it week after week.

The strain of writing all of those columns seemed to burn Reilly out, and he made the decision to bolt to ESPN late in 2007. There he did some TV features as well as some writing for ESPN the Magazine. I always had the feeling he had gotten away from what he had done best, although I couldn't blame him for seeking a change of pace. The arrangement stood until 2014, when Reilly retired from sports writing. Considering how well his books sold (several best sellers), it's hard to blame him for taking a step back.

However, it would seem that the sight of Donald Trump on a golf course was enough to drive him back to the typewriter ... er, computer. Thus we have "Commander in Cheat." Since golf is at the center of the text, it can be placed here relatively safely.

It's rather obvious that Reilly loves golf, especially when it comes to the traditions and rules of the game. It's also obvious that Reilly hates the way Trump approaches the game of golf for many different reasons. Those time-tested traditions and rules - which go into a number of different areas - don't seem to apply to the 45th President of the United States. Think of Rodney Dangerfield in "Caddyshack," without the one-liners, and you get the idea. It's difficult to stay angry over the course of 242 pages, but Reilly more or less does it here - using a scalpel rather than an axe to carve Trump up.

I suppose this list of offenses could be split into two parts. The first centers on violations of the game itself. The list probably starts with cheating during play, which might include kicking the ball into the fairway, not counting balls hit into water hazards, giving yourself putts under 10 feet, etc. That makes it difficult to judge how good a golfer Trump really is. He says he has a 2 handicap, but most experts rank him at a 9 or so - still pretty good for someone of his age, but not extraordinary. But it also includes matters such as driving carts on to tees and greens, hitting first off the tee and then taking off before others have hit (making it easier to cheat without someone watching), and so forth. Caddies are expected to throw balls out of the woods and improve lies. I'm not sure where inflating the legitimate number of club championships won fits in to this, but Trump has done that too - kind of like the size of his inauguration crowd.

Then there are the larger issues of golf-related activities, many of them involving his string of courses around the world.  Environmental laws and norms are ignored during construction and remodeling, contractors are stiffed or forced to take pennies on the dollar, statements about improvements and valuations of complexes turn out to be extremely inaccurate, and lawsuits are filed regularly to drain the pockets of opponents. And that doesn't include the little, petty items - such as putting up a marker to a Civil War battle spot on the 14th hole at Trump Washington, even though there's no evidence that such a battle existed.

All of the sins are nicely researched and chronicled, with Reilly providing the funny captions to keep the story moving along. The author only lets loose in the final chapter. One paragraph sums it up well: "When a man like President Donald Trump pees all over the game I love, lies about it, cheats at it, and literally drives tire tracks over it, it digs a divot in my soul and makes me want to march into the Oval Office, grab him by that long red tie, and yell, 'Stop it!'"

In short, Reilly had taken a laundry list of general actions by Trump that range from petty to horrible, and applied to just one subject: golf. The resulting book won't change many minds of the Trump faithful, but it does reinforce the feelings of disgust that others had about how the President acts. If you're part of the latter group, you'll find this very well done.

One final note: Reilly uses a quote to begin each chapter, and he uses one from Trump in Chapter 10: "My whole life is about winning. I don't lose." Well, more than 80 million people made him a loser on Election Day - and Trump can't kick any balls out of the fairway to change that, even though he's tried.