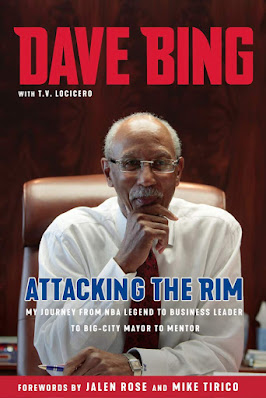 By Dave Bing with T.V. LoCicero

It's easy to wonder if Dave Bing considered borrowing the words "I Led Three Lives" for his new autobiography.

That was the name of a 1952 book that was written by Herbert Philbrick; it was later turned into a TV series. The three lives mentioned were citizen, community, and counterspy.

Pfft. That's nothing compared to Bing. He can list basketball player, politician, and business leader on his resume - with some notable success in all of them. It's hard to think of someone who has had more different types of challenges face him in a lifespan, which makes him a good candidate to get his thoughts down on paper in an autobiography.

Bing, first and foremost to many, was a great basketball player. He arrived in Syracuse and gave its hoops program its first run of sustained glory in the mid-1960s. You might have heard of his roommate from those days, Jim Boeheim. He's still coaching at their alma mater more than 50 years later.

Bing was the second overall draft choice in the NBA in 1966, going to the usually mediocre Detroit Pistons. He certainly did his best to change the team's fortunes during his time there. Bing was an instant star upon arrival, but simply didn't have the necessary help to make any sort of run in the playoffs. As a result, he might be overlooked when the great players of that era are discussed - and Dave had a great 12-year career despite being essentially blind in one eye. The Basketball Hall of Fame eventually called him for induction.

Bing always had been smart enough to realize there was life after basketball, and he prepared for it by learning various lessons in the business world. Eventually, Bing went out on his own, and put together a company that employed hundreds in the Detroit area and was a role model for minority-owned businesses. "Bing Steel" even picked up some national awards. Alas, when the Great Recession of 2008 struck, the firm simply didn't have enough resources to survive.

After taking the business as far as it could go - perhaps a year longer than it should have, because Bing wanted to keep people working, it was time to run for Mayor. The city of Detroit was in big trouble due to a variety of factors, one of which was corruption in the Mayor's office. Bing was considered an honest broker by most people in the city and served almost five years in the job. Eventually, though, the problems were just too large for the Bing Administration, and the state came in to help run the city under certain controls. Bing certainly did some good work, but miracle workers are few and far between. That finally allowed Dave to cut back a bit on work, but he threw himself into developing a mentoring program that tries to set up relationships between African American boys and men, one on one.

In the book, Bing certainly comes across well. He's usually a serious man with one eye on the next step who always has paid attention to what has been going on around him. But from a literary perspective, there's a lot to cover here - and it's hard to give everything its just due.

The basketball part of his life gets about half the pages dedicated to it. Bing didn't play for many top-notch teams in his career, so there aren't any exciting stories about big playoff games and superstar teammates (Bob Lanier is the exception to that). Bing is rather reserved in many of his comments, although he does write a bit about the drug problems that had entered the NBA by the time his final season in the league arrived in 1977-78. It's rather easy to figure out who the problem children were on the Boston Celtics' roster of that era.

From there, the business pages go by pretty quickly. Bing doesn't get too technical here, but the material is a little dry for the general audience. The chapters on running the city of Detroit perk the text up a couple of notches, but I had the feeling that anyone outside the Detroit metropolitan area might have trouble keeping up with the cast of characters.

What do we have at the end then? My guess is that two books would have worked better. The basketball story would have been a fine idea for Bing back when his name was a little more familiar to fans. A second book easily could have been done on trying to turn Detroit around - and then sold to the readers in Michigan. It's hard to be anything but superficial when reviewing such a complicated, interesting life in such a short span of pages.

But let's add something else that's just as important. "Attacking the Rim" makes it clear that Dave Bing could serve as an excellent role model to those who seek one. That's a bigger win than any playoff game in the long run.