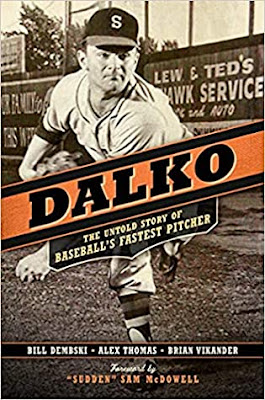 The number of recent sports legends who remain something of a mystery probably can be counted on less than two hands.

Such performers needed to play games in an era when television was not around to record them, which somewhat translates to the pre-1970s. That's old enough for some people to still remember what happened, but not so old that first-hand accounts no longer an be obtained.

It's a good description for those who obviously had enormous talent but never quite were able to use it for one reason or another. In basketball, for example, New York City featured Herman "The Helicopter" Hastings and Earl "The Goat" Manigault. Pete Axthelm wrote a book on NYC basketball called "The City Game" that spread stories about their exploits far and wide (go read it if you can).

Someone in that class for baseball was Steve Dalkowski. The legendary lefty from New Britain, Connecticut, is considered to be one of the hardest-throwing pitchers in baseball history - faster than Nolan Ryan, faster than Bob Feller, faster than Aroldis Chapman. The short version of the story is that Dalkowski never was too sure where the ball was going, and thus never reached the major leagues.

The longer version of the story is told in "Dalko." Bill Dembski, Alex Thomas and Brian Vikander joined forces to come up with the first full-fledged biography of the pitcher, as they tried to piece together as many parts of the puzzle as possible. The picture isn't complete now, but some of the blanks have been filled in.

Dalkowski was a good high school quarterback, but he received more attention for his work on the baseball diamond. No one at that level could touch his fastball, at least when it was in the strike zone. Steve ran up some unbelievable numbers in terms of strikeouts and no-hitters, although walks and wild pitches usually came with the package. Still, you can't teach velocity, and Dalkowski had more than enough of that. He signed with the Baltimore Orioles in 1957, and the professional odyssey began.

The pitcher spent the next nine years in the minors. The common denominator of those seasons, statistically speaking, is that Dalkowski had a ton of strikeouts but usually just as many walks. Inevitably, the free passes would pile up at the wrong time and he'd have to exit. Dalkowski probably received many more chances than the average pitcher to stick around because of his arm strength. It didn't help the situation that Dalkowski picked up a fondness for alcoholic beverages at a very young age - perhaps because of the pressure of being a phenom, perhaps because his father was known to drink as well. Then there's the fact that Dalkowski by most accounts wasn't particularly smart, which may have contributed to the fact that he didn't know how to control his emotions and instincts while pitching in games. It also meant he was anxious to be "one of the guys" and could be led into some difficult situations by others.

It's easy to guess that the people involved in major league baseball at the time didn't know what to do with a player with this particular package. As Sam McDowell (another hard thrower in his day) writes in the introduction, sports teams had no clue when it came to the mental part of the game back in the 1960s. At one point the Orioles tried to have Dalkowski throw several dozen pitches before a game in an effort to tire him out and force him to aim the ball a little more. It didn't work most of the time. In the meantime, Steve was working in an era without pitch-count limits and probably threw thousands more pitches in a year than equivalent prospects throw today.

Finally in 1962, Dalkowski had a little success working with Earl Weaver with Elmira in 1962. Steve's ERA was under 5.00 for the first time in his career. (in fact, it was 3.04) The wildness hadn't completely departed, but it was a bit more under control. That led to an invitation to the major league camp with the Orioles in 1963, where Dalkowski seemed to take another step forward. When he struck out Roger Maris, Mickey Mantle and Elston Howard of the Yankees in an exhibition game, the Baltimore roster no longer seemed completely out of reach. But Dalkowski hurt his arm in that game, sidetracking his career essentially for good. The alcohol rarely left his side throughout the next 50-plus years, with accompanying destructive effects on his health and relationships. Dalkowski died in 2020.

The authors certainly did their homework here, as a variety of articles and interviews are cited as sources in the text. But there are a couple of problems that come up in the actual book that - based on the reviews I've read - bothered me a little more than other readers.

The book certainly roots quite hard for Dalkowski to succeed in his quest to join the majors, even though we know he ultimately fails. That comes up in evaluating his chances at reaching the majors at a given moment. Someone who can't throw strikes regularly isn't of much use to a big league team. Did striking out the side against the Yankees in a meaningless exhibition game mean much to his chances of reaching the Orioles? It's a tough call to say that now, especially when the pitcher's lifelong record of wildness is considered. There is a quote that says Dalkowski might have been on the opening day roster in 1963, although it was a big jump from the middle of the minors and his chances may have exaggerated just to be nice.

There are a few such moments here. The good games along the minor league trail are considered signs of great promise, when his history tells us that they are more likely to be outliers. Dalkowski was promoted to Triple-A Rochester after the end of the season which is said to reflect that the Orioles' confidence in growing in him. It's much more likely that it was a paper transaction to fill out a roster once Baltimore set its 40-man major-league roster. The authors also take seriously am exaggerated comment from a teammate that Dalkowski had an IQ of about 60.

The three-headed approach to writing may have caused a problem in the finished product. Some information is repeated along the way here, so it probably could have used one more edit.

It's easy to appreciate the effort that went into "Dalko," and it's nice to have the information as part of the public record. Still, the legend of Steve Dalkowski remains elusive after reading this, and it probably always will be.