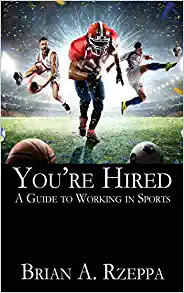 By Brian A. Rzeppa

Once in a great while, I receive a request on this site from a new author that asks me to take a look at his or her new sports book. If I have the slightly bit of interest in the subject, I try to take a look at it. After all, we all need a helping hand or six along the way, and maybe I can contribute some know-how with a review. (Note: If it’s not something of interest, I say so as well – because it probably wouldn’t help either of us.)

In other words … Brian Rzeppa, come on down!

New author Rzeppa has a master’s degree in Management and Organizational Leadership and a Bachelor’s Degree in Sports Management, and then moved on to work for a New Jersey newspaper. He’s branched into the book business with his effort, “You’re Hired – A Guide to Working in Sports.”

Let’s start with the good news, and it’s mostly good news. This reads like a professional effort. In other words, the words, sentences, and paragraphs flow together well enough. The language isn’t too simple or too fancy or too technical. It’s organized quite simply and logically. That’s an  important step; plenty of books don’t pass over that relatively low bar.

Rzeppa talked to 17 different people who came from a variety of different backgrounds. There are a few from the pro ranks, including a former baseball general manager. Some are administrators, including some athletic directors who have climbed up the ladder and stopped at various stages. After all, not everyone can become the AD at Florida. Then there are coaches, who obviously lead a nomadic life and often must uproot their family for the next opportunity – only to see a 19-year-old drop a pass in the end zone at the end of a big game, which leads to unemployment, which leads to another move.

The author gives a brief bio of the 17 subjects – which is a good idea, because by necessity the names are going to jump around a bit. From there, we’re off. The chapter headings are quite apt under the circumstances. They include interviews, searches, landing a job, challenges once employed, and learned lessons.

The keys, as Rzeppa puts it, are simplified into a few words: network, prepare, communicate, find balance, and be genuine. There’s a nice appendix that offers something of a sample philosophy statement for coaches. Tough to argue with any of that, and it’s nice to have it all on paper. Therefore, the book comes off as a worthwhile effort.

Two other points struck me along the way. The first is that this is a very narrow target audience as these things go. It’s not designed for beginners, who are just out of college and looking for that first or second job. I didn't rate it for that reason. The second is that “You’re Hired” is a relatively short book, checking in at about 150 pages.

Combining those two thoughts, I did find myself wondering if it would have been a good idea to widen the scope of the book to include entry level positions and higher. The lessons probably are similar in terms of what to do along the way. It would have been fun to read some origin stories along the way, and maybe find out from the success stories what they might have done differently in hindsight.

Take it from a guy who was inside it for almost six years and out of it for almost 40 others - the sports business is an odd one in one sense. It is considered a glamorous, fun profession, and that tends to depress salaries at the low end. You really do have to love it to stick with it in the hopes of getting rewarded. Baseball organizations are full of Ivy Leaguers who could be working on Wall Street but instead are calculating when the best time to pull out a pitcher from the World Series. (Note: those in Tampa Bay will tell you sometimes it doesn’t work out the way you want to be.)

But, most people need to try it, at least, to see if they are willing to put in the long hours necessary. As one minor-league baseball executive told me, “When someone leaves after a summer with us and discovers he’s not willing to do what’s necessary to have a career, that’s a valuable lesson too. It’s not a waste of time.”

For those already on that road, “You’re Hired” offers some good lessons in moving up the ladder. Good luck to them, and to first-time authors everywhere.