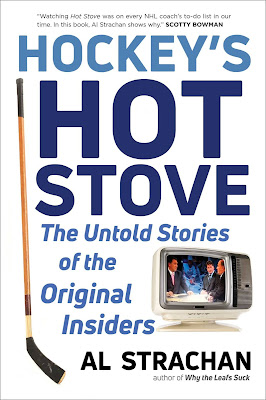 Sometimes good information from Al Strachan can pop up when it is least expected. Here's an example.

Strachan writes in his book, "Hockey's Hot Stove," about the time when Alexander Mogilny announced in 1990 that he had a fear of flying and only would be playing games within driving distance of Buffalo, his home location at the time. This caused quite a bit of commotion at the time, since NHL players fly to games all over the continent.

Here Strachan reports that shortly after the flying issue became public, Mogilny hopped on a plane, flew to New York, and headed for the office of Rangers' general manager Neil Smith. There Mogilny - who had defected from the USSR in May of 1989 - announced that he wanted to play for the Rangers. Smith treated Mogilny as if he were radioactive, telling him to get out of the office and go far, far away as fast as he could. I had never heard that story, even though I was working for the Buffalo Sabres at the time. It puts an entirely different tint on the situation.

That's what good reporters do, though - come up with good information. And Al, during a long newspaper career in Canada, was a good reporter.

Most newspaper types usually are famous in their region. However, a national television job on the side can do wonders for visibility. That's what happened to Strachan, who was something of a regular on CBC's "Hockey Night in Canada" for several years. Now in retirement but still pounding out books, he's come up with some stories from that era in "Hockey's Hot Stove."

The backstory requires some explanation, especially for those American readers who aren't near the Canadian border. Hockey Night is a great tradition in Canada on Saturday nights, as millions have been sitting in front of radios and then televisions for many decades. While the games obviously are the attraction, producers have thought about another part of the broadcast - what do we do during the two intermissions? One of the long-term answers was supplied by Don Cherry, the former coach who had a run of more than 30 years on "Coach's Corner" in the first intermission.

Then in the 1990s, CBC came up with "Satellite Hot Stove" for the second break, as opposed to player interviews or canned features. Baseball used the concept of a "hot stove league" informally to describe winter conversations about the game and its teams and players. People would gather around a stove on cold nights and talk about the summer game. It was that way in Canada too, except the subject was hockey and playing it wasn't far into the distance. CBC linked four analysts (usually newspaper people) by satellite during the second intermission, and let them slug it out. Strachan often filled one of those seats. It all worked, as the ratings stayed high right through the breaks in play.

In the book, Strachan reviews some of the segment's history from his perspective. He talked to some of the show's executives about how everything came together, as well as some of the other "insiders" who were part of the panel. Mike Milbury and John Davidson might be the most familiar names to American readers.

As you might guess, that's not a particularly sturdy frame to hang a book on. Therefore, Strachan takes quite a few tangents along the way. He talks about his career, and how he went about acquiring information from various sources. Hint: It sure sounds like Al spent a lot of time in bars, to the point where it's easy to wonder in hindsight if that much drinking became something of a problem.

Along the way, Strachan does make a key point about access in the hockey world these days. As the NHL has gotten bigger, it has become more conservative in its dealings with the outside world. That happens to large institutions when they grow. Interview opportunities for home teams on game days are essentially limited to mini-news conferences, with everyone getting the same quotes. As a result, the number of chances to talk to players and coaches on a one-on-one basis has been reduced drastically. Throw in the addition of the team's own media, which posts interviews on its website shortly after they take place, and it's difficult to get unique information. There are ways around that occasionally, but stories certainly are more homogenized than they used to be.

This is all cheerfully disorganized, jumping from place to place at times. Strachan often has criticized people connected to hockey in his columns and books, and he doesn't back down here either. CBC executives probably take the worst hit this time around. Think of it as a Sunday notes column in some ways, and you'll be fine with it.

It's tough to judge how well "Hockey's Hot Stove" will go over. For those who aren't within driving distance of Canada, obviously it's not a good fit. It obviously helps to have watched the show during Strachan's era. I was usually working on Saturday nights in those years, so I can't say I was a fan of the segment. But the resulting book is quick and easy to zip through with an entertaining, no-nonsense writing style. Besides, you might be surprised about what sort of information pops up along the way.