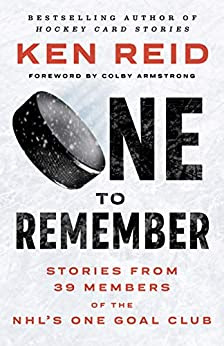 It's always interesting to be read about "the one and done" club. That is to say - stories about someone who did something worth noting once, but stopped at that point. Professional sports is the obvious group for that, since statistics and record books are kept for such purposes. But it probably could apply to some other professions. First time before the Supreme Court? First heart operation performed on a patient? First published story? You get the idea.

Ken Reid did a book on people who had the chance to play in one National Hockey League game. It was a quick,enjoyable read. Now Reid comes back with a similar book about those who scored one goal in their NHL careers. "One to Remember" is much like its cousin, "One Night Only."

Reid talked to 39 different people - most of them from the recent past - who scored one goal but only one goal at hockey's highest level. If you have heard of more than - let's see - five of the people on the list, you watch a lot of hockey. Three of the solitary goal-scorers are goalies, and those names are more well-known. Billy Smith is a Hall of Famer, while Chris Mason and Damian Rhodes had enough time to make an impact in the league.

Otherwise, these are not household names. I do remember Mike Hurlbut turning up in a Sabre uniform in the late 1990s for a couple of games. Brad Moran was drafted by Buffalo but never played there. Scott Metcalfe was acquired by the Sabres during the 1987-88 season, and scored during his 17 games with the team. Every hockey fan knows Dave Hanson from his time in the movie "Slap Shot." So that's seven - not bad. A few others sound a little familiar, perhaps because they were high draft choices. But many others are complete unknown.

Many of the stories are about what you'd expect. Player gets called up when a team needs a warm body for a short time - and he scores in that brief appearance. It may be on a skilled play, or it may be luck, but said player still gets a puck on a plaque and the right to say he scored an NHL goal for the rest of his life. Many played several years in the minors or in Europe, while others moved on to other things. Some played more NHL games because they were enforcers at the time, and their skills and ice time were limited.

The best stories are the unusual ones, of course. Reid wisely starts with the story of John English, who scored a goal but got stabbed a week later and needed to fight for his life before recovering. His hockey career never did recover, though. Steve Coates scored one goal for the Flyers, and wound up spending decades as part of the team's broadcast crew. Brent Tremblay faked out Gordie Howe for his only goal, but his back wouldn't let him play much longer and he wound up in the ministry.

Reid tells the stories simply. He also comes across as sympathetic to all of his subjects. He knows that every kid that has ever laced on skates for a game of hockey wants to score in the NHL some day, and reaching that goal is worth celebrating. That makes "One to Remember" pleasant reading for anyone who picks it up.

Labels: Review: One to Remember