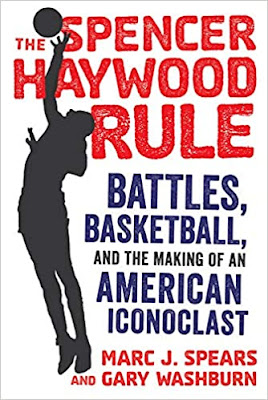 This sounded so promising at the beginning.

The so-called "Spencer Haywood Rule" is a great starting point for a book. Haywood came out of the University of Detroit early to sign a contract with the the Denver Rockets (later the Nuggets) of the American Basketball Association. After a spectacular rookie season in 1969-70, that included winning the MVP and Rookie of the Year trophies, Haywood became upset with his contract terms and wanted to jump to the more established NBA.

A major reason that he couldn't do that immediately was that his college class hadn't graduated yet, and the NBA didn't take players unless they qualified under that rule. It went all the way to the Supreme Court, and Haywood finally won.

The ripple effects of that decision are still being felt today. If a player who is a year out of high school is good enough, he can go straight to the NBA. A ton of great players have done that over the years, including LeBron James, Carmelo Anthony and Kevin Garnett for starters. And really, why shouldn't they be able to sell their services if there are employers willing to pay them? That's the way it works for virtually every other industry. If a 19-year-old computer programmer wants to drop out of college to work for Microsoft for $500,000 a year, he or she can.

There's probably a good story about all of the background that led up to this landmark court decision. Unluckily, this isn't it. What we do have is a relatively simple, and somewhat frustrating, semi-autobiography of Haywood called "The Spencer Haywood Rule."

"Semi-autobiography" may not be the right word for this, but it will do. Authors Marc J. Spears and Gary Washburn obviously spent quite a bit of time interviewing Haywood about his life's story. The resulting quotes serve as something of a foundation for the book. (Be forewarned - you're not likely to ever see many books with the word "shit" used in so many different ways as it appears in Haywood's quotes.) Spears and Washburn then supply supporting material to the story, no matter how rational Haywood's points might be - and sometimes they aren't.

The story starts off well enough. Haywood grew up in rural Mississippi in the 1950s and 1960s. Slavery may have been outlawed a century before that, but make no mistake - Spencer and his family members were essentially slaves. Haywood's stories of those days are chilling and gripping: education was secondary to working the cotton fields at certain times of the year, and African American caddies served as targets for white golfers on the driving range. I must say, I'd still have a little bitterness inside of me if I grew up in those surroundings. It's good to see he could overcome that sort of start to make something of himself.

Haywood eventually was sent to live with relatives in Detroit, where he grew into his body and became a basketball star. Spencer spent a year at Trindad State Junior College in Colorado, where he dominated play. Somehow he caught the attention of people looking for players for the 1968 U.S. Olympic team, which was having trouble recruiting player in that turbulent era. Haywood made the team, and the Americans probably wouldn't have won the gold medal without him.

From there it was on to the University of Detroit for a season, and on to the start of his pro career mentioned earlier. It didn't take long for Haywood to show he belonged in the NBA, putting together four excellent seasons on some so-so Sonics' teams. Along the way, Haywood apparently wasn't winning any popularity contests on the team - no reason was really given - and Spencer was sent to the Knicks. His play slipped a notch or two in New York, and he also married fashion model Iman. That led a trade to New Orleans for part of a season, and a move to Los Angeles - where he developed a cocaine addition that led to him sitting out the end of the NBA Finals in 1980, won by the Lakers.

The Lakers couldn't get rid of him fast enough at that point, and Haywood was off to Italy for a year before returning to the NBA. The Washington Bullets added him for two seasons, but he apparently headed to New York when Iman got into a severe accident ... without working out the details with the Bullets, who let him go. And that was it for his basketball career.

Haywood cleaned up his personal life after his Lakers' days - good for him - and has done some work with addiction victims. It's not overly clear what else Spencer has been doing with his time in retirement. In some cases, it certainly sounds like he's bumped into some racism. In others, the actions are a little harder to defend. For example, there is some anger expressed at the Detroit Pistons because they didn't hire him for a job after his retirement. After all, the book argues, Haywood brought a lot of fame to Detroit through the gold medal and his basketball exploits - not to mention the "Spencer Haywood Rule." The case about what any of that has to do with the Pistons isn't quite clear. There's also a little anger here about the time it took for the Sonics to retire his uniform number (ironically, it came shortly before the team moved to Oklahoma City) and reach the Basketball Hall of Fame - although he did receive both honors.

"The Spencer Haywood Rule" has its moments, and it's good to see that Haywood seems to be in a better place personally these days. Still, by the end of the book I was happy that I was moving toward the conclusion. Think of it as a missed opportunity, and you'll get the idea.

Read more about this book at Amazon.com