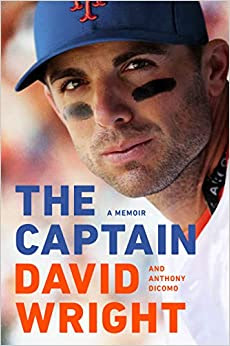 By David Wright and Anthony DiComo

For more than 40 years, the third baseman's job for the New York Mets read like something like an Abbott and Costello routine - as in "Who's on third?" The Mets started with Don Zimmer at the "hot corner" back in their first season and went through a parade of candidates after that.

Then David Wright arrived in New York in 2004, and the parade stopped.

Wright settled in for the next several players as one of the best players in baseball. He was a regular in All-Star Games, showed up every day, and was by all accounts as good a person as he was a player.

Injuries caused Wright to start having difficulties staying in the lineup in his 30s, and when he did play he wasn't as good as he had been. It happens. Wright eventually retired after the 2018 season.

No doubt there are still Mets' replica uniforms with Wright's name on the back scattered throughout the New York City area, and deservedly so. Therefore, it didn't take long for someone to come up with an idea that Wright should write a book about his baseball life.

"The Captain" - which became a title and a nickname for him during his time with the Mets - is that book. No doubt it will be scooped up as holiday gifts in that part of the world, if not sooner. But will it be of interest to the rest of us? That's probably the key question upon picking it up.

Until he was 30 or so, Wright had something of an ideal baseball life. He came out of the Norfolk area with plenty of talent and even more drive to go with it. David apparently was at his happiest when he was in a batting cage, smacking line drives into the netting. It led him to status as a first-round draft choice by the Mets in 2001.

After a quick journey through the minors, Wright arrived with the Mets for good in 2004 and quickly claimed a starting job. While David was a fine player for the rest of the decade, the Mets generally had their ups and downs. Then in 2011, Wright was injured on a play at third base - and everything seemed to go downhill. A guy who had never played fewer than 144 games in a season until then only would have one more season the rest of the way. He did help the Mets reach the World Series in 2015, but a healthy David Wright might have made a big difference in that matchup with the Royals.

The most compelling part of the book comes at that point, oddly enough. Wright was something of a mystery guest to the team in his final few years. Since daily updates weren't given in that stretch, most fans didn't know what he was doing then. He writes with a lot of emotions as he discusses his unsuccessful efforts to heal enough to return to baseball. David sure spent a lot of time in different locations, working with doctors and rehab specialists in search of something of a short-term cure. But they didn't work, and Wright played one last game at the end of the 2018 season and then retired.

Outside of those "lost" years, Wright's book simply doesn't have a great deal of drama in it. This may be a function of his personality, since he seems to be liked by almost everyone and goes out of his way to maintain good relations. In the meantime, though, there aren't a great many stories in the text about teammates, managers, etc. New York certainly had some characters pass through in his time there. A few anecdotes containing some laughs would have made much of the book less dry and more interesting.

There's little doubt that major leaguers can be role models for some, and David Wright was a good person to choose if someone needed a bit of guidance. This book backs this up 100 percent. You can let your kids read it, because there's nothing offensive in it and they'll no doubt pick up some lessons on behavior. I think this explains some of the enthusiastic reviews that it has gotten from some readers.

However, "The Captain" is a bit too insular to have much wide appeal. Maybe Wright needed a little more time to take the events that are now in the rear view mirror and put them into perspective. Instead, this comes off as a simple review of the basics. It will work for some, but will leave others wanting more.