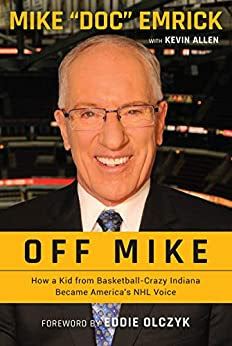 Mike Emrick deserves all sorts of credit in the field of sports broadcasting. He's outlasted just about everyone when it comes to hockey announcing in the United States. Emrick started calling hockey in the early 1970s, and here he is - almost 50 years - later still working hard at his craft. In fact, he turned up on some of the broadcasts of the NHL's long playoff system in the summer and fall of 2020.

At least the pandemic came up at a time that Emrick was free to finish his autobiography. The finished product, "Off Mike," is scheduled to be released in October. It's about what you'd expect - pleasant, with a few good vocabulary words thrown in along the way. After all, who else can describe a goalie's equipment as his "paraphenalia"?

It seems unlikely that a veteran American broadcaster would grow up in a small town in ... Indiana. That seems like "Hoosiers" country to most, a place where basketball is kind. But on December 10, 1960, he caught his first hockey game in person in Fort Wayne as the Komets hosted the Muskegon Zephyrs. Mike caught the bug right there.

It seems like every broadcaster had to go about the business of paying his dues in order to reach the big time, and Emrick was no exception. He worked as an announcer at small radio station, took any job he can get, and made the usual mistakes along the way. The good ones learn and get better. Broadcasting is sort of like the music business when it comes to hitting the big time. You never know when someone will be in the right place at the right time. Emrick worked in such places at Port Huron, Michigan, and Portland, Maine.

If anything, Emrick gives the impression that he was very content working on minor league hockey games. Some of the best stories of the book comes from those days. One favorite was the time that a drawing was held in Portland to determine which of the ticket-holders would become the winner of a car. Sue Hamilton's name was announced; so far, so good. And then two women showed up by that name. Which one would win? The fans started chanting "two cars!" Somehow, the team figured out which Sue Hamilton was the rightful winner, and the other received enough free gifts to leave her content as the first runner-up. As you'd expect, some of the legendary minor league brawlers of that era comes of as well.

Emrick eventually got the call to the big time, and he has followed the bouncing rights contracts when it comes to employers. Mike has worked for Emrick has also done play-by-play for CBS, NBC, NBCSN, ABC, TNT, ESPN, Fox, CSTV, SportsChannel America, SportsChannel Philadelphia, PRISM, Fox, and a few others. He must have a lot of blazers stored somewhere. Emrick also has done a lot of traveling over the years, and he didn't help himself at times by living quite a distance from the home rink. For example, while working for the Flyers, he and his wife commuted from Hershey - no small task.

"Doc" (his nickname because of a Ph.D in communications) mostly has been working for national broadcasts for almost a decade. This has allowed him to brush up against some hockey legends, like the time he sat down with Wayne Gretzky, Mario Lemieux and Bobby Orr for a long interview. Emrick also is famous for collecting little bits of information to drop into broadcasts, such as the fact that Gretzky and David Letterman attended the same high school in Indianapolis (but not at the same time, of course).

It's easy to guess that the drawback of that sort of schedule in terms of the book is that he's not around one place long enough to get to know many of the principals well. So most of the other tales that fill the rest of the book are about his life - with or without a microphone. It all goes dowm smoothly enough, but it's hard to say it is compelling reading throughout the book.

Emrick in person is a lot like his on-air presence - a good guy who wears well over time with most. "Off Mike" isn't a book that will leave you with tons of anecdotes to pass along to others, but it goes by quickly in a pleasant way. There's nothing wrong with that.