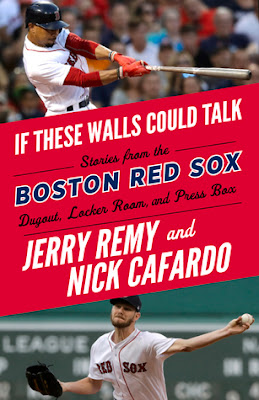 By Jerry Remy and Nick Cafardo

Jerry Remy has had a busy life in many ways - probably enough to fill a couple of autobiographies. Let's count up some of the aspects of it.

First of all, he had a good-sized career in major league baseball. That alone makes him a rare individual, as he did something millions aspired to do. Remy spent most of his career playing with good teams that had some Hall of Famers.

Then after his first retirement, Remy coached for a year and slid relatively smoothly into the broadcast booth. He's been working of the games of the Boston Red Sox for more than 30 years. Remy has achieved something close to icon status, and he's been a familiar presence on Red Sox broadcasts for a long, long time.

If that weren't enough, Remy has had plenty of off-field incidents - more than anyone deserves. He suffered from depression, to the point where he could barely go to work. Remy has battled cancer a few different times; he blames a cigarette habit for that problem, which has recurred a few times over the years.

The biggest shocker, though, when his name was in the news when his son murdered his fiance. The son will spend the rest of his life in jail, and you can imagine what that did to the family. Considering that Remy is a public figure, the horrible situation certainly became magnified.

There have been lives that have much less full that have been recorded in books close to 400 pages. Therefore, a glance at the relatively thin volume called "If These Walls Could Talk" would make the reader guess that the autobiography is going to be on the superficial side. And he or she would be right.

It's a relatively standard story for a sports figure, except for the fact that Remy is a bit hard on himself at times. He grew up in Massachusetts as a Red Sox fan, and baseball was well above academics when it came to his priorities in school. It eventually paid off with a contract with the then California Angels. Remy was on the small side and had no power, but he could run. The second baseman overcame some obstacles and became a major-league regular.

From there, he was traded to the Red Sox before the 1978 season - which was something of a dream come true. His first season went from dream to nightmare when Boston lost a playoff game that fall to the Yankees to keep the Red Sox out of the postseason. But Remy was surrounded by such players as Carl Yastrzemski, Jim Rice, Carlton Fisk and Dennis Eckersley - all in the Hall of Fame. Soon after that, Remy started having injury problems that led to his demise as a player. And after a year of coaching in the minors, it was on to the broadcast booth. The play-by-play men have revolved over the years, but Remy has been a constant.

There are some stories about people Remy encountered along the way. He's also come across as a good-natured individual, even if he apparently can be a little introverted in certain situations. There aren't many stories about people encountered along the way that he didn't like, and not many stories that are particularly revelatory. Some of the pages are filled with short recaps of Boston's four championship seasons in this century, although most of the details there will be familiar to fans of the team.

The pages do go by pretty quickly, and Remy comes across quite well on a personal level here. The broadcaster had some help with the book with a newspaper reporter, but there's a tragic part of that story there too. Nick Cafardo was a baseball writer with the Boston Globe who died in spring training of 2019.  That puts a slightly bittersweet tone to the project.

"If These Walls Could Talk" obviously is targeted toward Red Sox fans, and they won't find anything objectionable here. It's just not a book that you'll use as a reference book for a lifetime.

Learn more about this book through Amazon.com.

Be notified of new posts on this site via Twitter @WDX2BB.
Posted by Budd Bailey at 2:43 PM