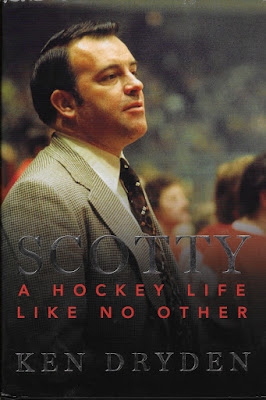 Dryden has written seven books over the years, in-between his other projects. Remember that he also was a Hall of Fame hockey goalie, and a member of parliament and a Cabinet minster in Canada. Dryden certainly could write an interesting autobiography if he gets around to it, but he seems content with other subjects of interest.

"The Game" was his first effort, and it is generally considered the best hockey book ever written. Just to show his range, his book "Becoming Canada" has a first chapter that contains the best analysis of Barack Obama's 2008 election that I've read anywhere. He wrote a book about schools, because he needed to know about them for his government job, and he wrote a book about one of his constituents, because he wanted to know what they were thinking.

Dryden is very thorough, and chooses his words and phrases carefully. Every so often, his books contain a piece of insight that make the reader stop and think for a moment, "How come I never thought of that?"

Book number seven is a tough assignment. "Scotty" in some ways is an authorized biography of Scotty Bowman, the Hall of Fame hockey coach. Bowman was never too interested in writing his own life story down on paper, so he did the next best thing. He let Dryden write it. The two teamed up on some great Montreal Canadiens teams in the 1970s.

Bowman's resume is the stuff of legends. He won a record nine Stanley Cup champions as a coach, and was involved in five more titles as an executive. Bowman had a career that still continues at the age of 86; he's an advisor to Chicago Blackhawks general manager Stan Bowman. Yes, Stan is Scotty's son. Yes, Stanley Bowman was born right after Scotty claimed his first Stanley Cup in Montreal in 1973.

Dryden and Bowman had a year-long series of conversations about a variety of subjects in this book. It's a rather unlikely story in some ways. Bowman grew up in the Montreal area as a hockey player, only to see his playing career derailed by a high stick to the head at age 18 by Jean-Guy Talbot. (Footnote: Bowman later coached Talbot in the NHL, an amazing example of letting bygones by bygones.) Bowman took whatever work he could get in hockey on the side, but seemed destined to work for a big paint company in Montreal when the Canadiens called to offer him a full-time job. Bowman didn't have to be asked twice.

That started a career that lasts to this day. He still attends NHL games regularly from his two homes in the Buffalo and Tampa areas.

Of special interest to some of my readers, of course, is about the time spent in Buffalo as general manager and sometimes coach of the Sabres. It's really the only place that Bowman ever failed in hockey. He really wasn't cut out to be a GM, and the Sabres were the only team to use him in that role.

The section on Buffalo isn't a long one, but it does have some information of interest. Bowman described Gil Perreault this way: "As a teammate, you couldn't find anyone better. But he had no leadership at all. None. He didn't want that responsibility."

Bowman also was surprised that the Sabres didn't have many players under contract when he arrived in 1979. "When I went to Buffalo that summer after I had signed, and I started looking around, they had 25 professional players under contract. Twenty-five! And the reason was, and I found out later, the Knoxes were rich people, they had money, but they weren't going to spend it."

Bowman also admitted that he never got the administrative part right, shuffling people in an out of the head coaching job but realizing that coaching was what he did best. (Bowman doesn't mention here that he once tried to bring Herb Brooks in as the Sabres' head coach, but couldn't get it to work.) As Dryden writes, "For perhaps the first time in his career, he seemed out of answers." That led to his dismissal in 1986.

Bowman's life is covered nicely enough, but it's the subject of hockey history where the book turns thrilling to those who like that subject. Bowman has been watching the NHL closely for about 70 years, and he's an encyclopedia of what went on and why. Dryden took the unusual step of having Bowman pick the eight best teams in "modern" NHL history (only one team per dynasty was allowed), and squaring them off. Bowman provides analysis of each team and then reveals who he'd think he would win such games. No spoilers here, but it's great fun to read opinions of great players and teams.

Taken on its own merits, "Scotty" offers some fascinating insights into Bowman's life and the game of hockey that you won't find anywhere else. But there's one aspect of the story that isn't explored.

Scotty has the reputation now as the kindly, wise grandfather type who remains relevant as the years wind down, and the book doesn't change that. But during his prime years, Bowman was considered a genius but not particularly loved by anyone outside of his family. The quote that received the most repetition was that the Canadiens hated Bowman 364 days a year, but loved him the day they all won the Stanley Cup together.  When Rick Martin of the Sabres sued the team and Bowman over the way his knee injury was handled, he said at the time, "People all over the league were coming up to be saying, 'Stick to Scotty.' " Media members in those pre-Internet days wondered why Bowman would lie to them in a private conversation about things like the starting goalie for that night's game. They also noticed that he was one of the few coaches in history that were more talkative and analytical after losses than wins. Scotty did mellow a bit later in life, and perhaps he realized after retiring from coaching that he could relax a bit. Still, it would have been interesting to see that part of his personality explored.

Covering such subjects would make it a different book, of course, but the book we have is absolutely worth reading by hockey fans. Who wouldn't love to hear Dryden and Bowman talk at length about the game they shared and loved? This is the next best thing.

Be notified of new posts on this site via Twitter @WDX2BB.
Posted by Budd Bailey at 11:34 AM