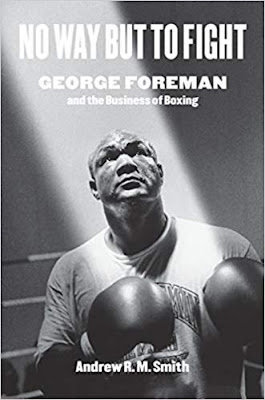 F. Scott Fitzgerald once wrote, "I once thought that there were no second acts in American lives, but there was certainly to be a second act to New York's boom days." It's interesting that the first part of the line is the one that usually gets repeated, if only for the author of the new story to point out that it isn't true.

Let's give credit, then, to Fitzgerald for the set-up for a new book on George Foreman called "No Way But to Fight." There certainly was a second act to George Foreman's boom days.

Andrew R.M. Smith delivers an almost scholarly look at the life of the twice heavyweight champion, and that in itself is rather funny. After all, Foreman seemed to only have a passing acquaintance with the educational system of Houston during a childhood that was mostly noted for its poverty. What happened from there was almost stunning in hindsight.

Foreman signed up for the Job Corps, an anti-poverty program in the Johnson Administration, and had three square meals a day for the first time in his life. He became big and strong enough to attract attention from people who were running amateur boxing programs. It led to a gold medal at the Mexico City Olympics in 1968, with George waving tiny American flags in the ring after the victory. Remember, that was the Olympics of the protests of Tommy Smith and John Carlos, so Foreman made an impression.

From there, a pro career was a natural next step. The quality of his opponents was rather poor, but he beat up on all comers and eventually earned a title shot against Joe Frazier. As Howard Cosell screamed out in the blow-by-blow description, "Down goes Frazier! Down goes Frazier! Down goes Frazier!" In less than two rounds, Foreman was world champion. But then he ran into Muhammad Ali in Zaire in 1974, losing one of the most famous boxing matches in history. Foreman soon retired, and the story seemed over for 10 years.

Or was it? Foreman became a preacher and decided to use boxing as a way to raise money for charitable efforts. It was a curiosity at first - a 38-year-old starting up the mountain again - but the wins against mediocrities kept coming. And Foreman discovered he could make people laugh along the way, making him more acceptable to boxing fans than the sullen personality he offered to the public the first time around. So there was joy when Foreman hit the highest peaks of the sport again.

This is rather dramatic material. It's only sweetened by the fact that Foreman sold his share of the profits to a grilling machine for more than $100 million after getting out of boxing for good. Boxers are not known for their money management skills, but Big George did fine on this one.

Smith certainly put in the time on this project, which began as a doctoral dissertation. He interviewed Foreman several times, and scoured all sorts of sources for information. The footnotes section of the book goes on and on - detailing Smith's large task.

Still, the book is missing something - fun. Foreman had so many transformations over the years that it's difficult not to smile when thinking about him now. But that quality doesn't come across too well here. The only time that the writing has some flair is when some of the big boxing matches in Foreman's career are described.

Part of the problem is that there are virtually no fresh quotes here - even though Foreman must have provided some in the interview process. Many of Foreman's opponents, such as Ali and Frazier, have passed on, but a little outside perspective might have been nice.

I have used this analogy elsewhere - "It has all of the notes but none of the music." It works on "No Way But to Fight." The book will fill a need for information about all of Foreman's life story, but it's not quite as good a read as it could have been.

Be notified of new posts on this site via Twitter @WDX2BB.
Posted by Budd Bailey at 8:25 PM