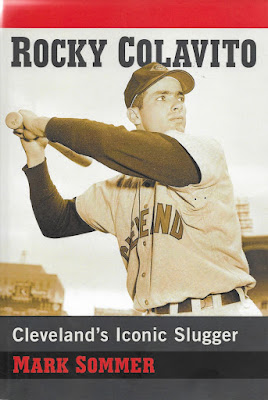 Baseball writer Bill James once started a long article on the Cleveland Indians in 1981 by explaining why the trade of Rocky Colavito mattered more than two decades later.

"Across the history of the Cleveland franchise a line is sharply drawn, and by that line the present condition of the Cleveland Indians, uniquely can be dated to that hour. On April 12, 1960, the Indians cesed to be what they had been for thirty-one years and became what they remain now."

The Indians had been good for about 30 years before that day. Then they traded Colavito to Detroit for batting champion Harvey Kuenn. And everything changed.

"For what they traded him is not the point. The point is that the Indians possessed tradition, that Colavito was carrying a torch which had been passed to him from Earl Averill by way of Jeff Heath and Larry Doby, and when he was traded the fire went out. ... The point is that the Indians of 1959 knew they could win because they always had won, and they knew how to go about it. And when the leaders of their offense were gone, the Indians did not know whether they could win or not."

I would argue that the Colavito trade still matters in that sense, even though the Indians have had some good stretches since then (World Series appearances in 1997 and 2016). But interest in the Indians may not have ever recovered from the trade, and that has meant the franchise rarely has been able to maintain winning teams for very long, sinking back into rebuilding mode. And that's why Mark Sommer's book, "Rocky Colavito," should have some relevance for baseball fans today, particularly those in northern Ohio.

Colavito came out of the Bronx to join the Indians in the mid-1950s, and he brought three primary characteristics with him. The outfield had a powerful bat, capable of smacking a home run anytime he was at the plate. He had a throwing arm that was almost legendary, to the point where he probably would have been a full-time pitcher had his bat been a little weaker. And Rocky had flat feet, to the point where he was excused from the military draft, and was relatively slow.

The power was the important part. Once he settled in as a regular, he hit 41 home runs in 1958 and 42 in 1959 to become one of the most feared sluggers in baseball. Colavito loved Cleveland, and Cleveland loved him back - to the point where, as Sommer writes, one movie theater interrupted a film to announce Colavito's trade. From there, the outfielder did some bouncing around - to Detroit, to Kansas City, and back to Cleveland. In 1966 he still hit 30 homers at the age of 33.

Almost in the blink of an eye, though, it ended. The Indians traded him again to the White Sox, and he moved on to the Dodgers and Yankees after that, but he was done after the 1968 season. It's tough to say what happened, but sometimes big sluggers who are slow age quickly. Baseball-reference.com says the most similar player to Colavito was Frank Howard, who was still a feared batter at age 33 but was out of baseball at 36. Colavito also points to an arm injury suffered along the way that hurt his throwing for the rest of his playing days.

Big credit goes to Sommer for being thorough here. He spent dozens and dozens of hours talking Colavito himself, and then tracked down a variety of other sources for information. Sommer really tells the story about what the fuss was about. Colavito's teammates still love him, pointing out what a classy, helpful person he was (and is). Even the founders of fan clubs in Cleveland and Detroit turn up, saying that couldn't have picked a better subject.

Even so, Colavito seemed to have problems with a great many of his bosses - an avenue that really isn't fully explored here. But Rocky says he didn't have a lot of respect for quite a few managers, general managers and owners he encountered along the way. Perhaps he was born 15 years too early, as questioning authority wasn't considered a good idea in baseball at that time.

Sommer exits with a discussion of Colavito's Hall of Fame chances, using modern statistics. I can argue that the outfielder probably played like a guy headed for Cooperstown from 1958 to 1962. But that's only five years, and longevity is a big part of the equation for induction to me. Therefore, I don't think he belongs in baseball's Hall. But, Colavito certainly had an impact on the game during his playing days, especially in Cleveland.

That makes him worth remembering, so it's good to have a full biography on the shelves. "Rocky Colavito" won't take up much room on the bookcase (the type is small and smaller), but it's unusual story. Sommer (a former co-worker of mine) thought a full biography was a worthwhile idea, and he was right.