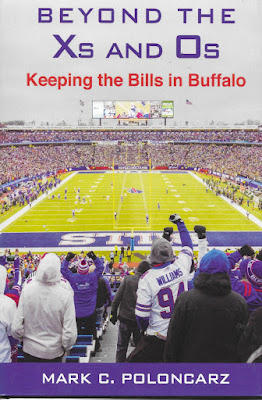 We're used to seeing politicians come out with a book when they run for higher office - particularly President. Such publications are usually life stories and/or policy statements. They also are often rather boring.

Mark Poloncarz twists that formula a bit with "Beyond the Xs and Os."

The current Erie County Executive, and candidate for another term, has written a book containing the play-by-play of the lease negotiations that kept the Buffalo Bills here. It was climaxed when an agreement between the county, state, and the Bills in 2013. Poloncarz no doubt discovered that it's not easy to squeeze in the writing of a book into your life, especially a life that must be pretty busy as it is.

But here that book is, six years later. What's more, it's a respectable job of telling the story about how the negotiations went - a look into a process that usually more or less stays behind closed doors.

What is striking about the talks from the perspective of 2019 is that there was a basic agreement on the situation - all sides wanted a deal done.  Poloncarz certainly didn't want to see the Bills leave town, particularly while he was County Executive. (Footnote: it's interesting to note that there are plenty of people out there who dislike sports in general and don't find the idea of subsidizing athletic teams a particularly good idea. But few politicians have the nerve to test that, since the pro-sports faction is a loud and enthusiastic one.) The state, which had seen two NFL teams move its home base to New Jersey over the years, certainly didn't want to lose the Bills. As for the team, owner Ralph Wilson had no interest in seeing the Bills move to another city as long as he was alive.

So it should be easy, right? These things are never easy. The first catch is that Wilson, who was in his 90's when the negotiations began, wasn't likely to be alive at the end of a 10- or 15-year lease. The government bodies wanted protection against the team moving in the event of Wilson's death. The problem, of course, was that an NFL franchise was worth more in another city than in Buffalo. That increased the likelihood than an outside group would want to buy the Bills with the intent of moving it to say, Los Angeles (open territory at the time) if there were no legal restrictions. Eventually, a $400 million "poison pill" was agreed upon for an early termination of the deal, which did indeed chill out of town interest.

That was the most difficult obstacle in the negotiations themselves. But the initial roadblock, according to Poloncarz, was surprising. The state had representatives sit in on the early negotiations, but contributed little. The silence of state officials finally ended when the Cuomo Administration apparently realized that time was starting to become a factor, as the TV announcers say during games. It came up with an idea for a new stadium, which went nowhere since no one else wanted a replacement structure (and its accompanying cost) at the time.

As you'd expect, drawing up a document that could fill up a five-page binder isn't easy. Poloncarz points out that sometimes you have to let lawyers go off by themselves and solve some issues with out the emotions that the lead negotiators bring to the bargaining table. But at other times, the lawyers can get too entrenched in position, and those negotiators have to step in and provide a compromising spirit on issues. Both situations took place in these talks, and it was the latter that resulted in the final completion of the deal.

Poloncarz comes off pretty well here. He appears to be smart, thorough and logical, although he doesn't provide much levity along the way. Assistant Rich Tobe might have been an even bigger hero of the negotiations. He had developed an excellent relationship with Bills' lead negotiator Jeff Littman, and that really made the process easier.

A brief aside here - one personal surprise was when it was revealed that there was some anger from the Bills about the fact that The Buffalo News didn't spend any advertising dollars with them. The Bills believed that the team was good for circulation, especially on fall Mondays. It's an interesting point, especially since the newspaper does do some work with the Bisons. It would be nice to hear the other side of the story in that one.

This is not a book that is likely to find a big audience. Football fans probably don't care about such matters as long as the games go on, and there are probably more dramatic negotiations to examine out there. Maybe that's why it hasn't turned up at some local bookstores. But "Beyond the Xs and Os" is still a look behind the curtain, and that always carries some interest. And it's a small enough book that the reader won't get bogged down. Therefore, those with an interest in sports business will find this worth their while.

Be notified of new posts on this site via Twitter @WDX2BB.
Posted by Budd Bailey at 4:51 PM