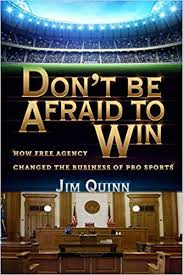 There are plenty of things going on off of our sporting fields that affect what happens on the actual playing surface.

Jim Quinn knows all about that.

He's been around at many of the major legal battles concerning collective bargaining agreements concerning sports and their players for many years. Quinn has something of a grand slam in this area, having worked on cases in baseball, football, basketball and hockey. If you want someone who doesn't think a salary cap is something worn on your head, Quinn is your guy.

Quinn started with basketball almost 50 years ago, and has been around for plenty of game-changing moments. Through that time, he's managed to make himself relatively anonymous, since he's always worked on the outside rather than for the respective players associations directly. But make no mistake - his fingerprints have been all over some of the major American sports negotiations in history.

You'd think he'd have some stories to tell after all that, and he does. Quinn has written a book called "Don't Be Afraid to Win." The title comes from football's Gene Upshaw, who said those words to Quinn shortly before Quinn was to make the closing argument in a major legal action involving free agency in professional football. Upshaw was a Hall of Fame player with the Oakland Raiders who went on to a long "second career" with the NFL Players Association.

But Quinn actually got his start with basketball. He had joined a law firm in New York in the early 1970s, and there was a "basketball case" kicking around the office involving the NBA and its players over a possible merger. Quinn became part of the legal team for the players' side, and helped push through the agreement that allowed the 1976 merger between the NBA and the American Basketball Association to take place. That was a crash course in sports law, a very insignificant part of the legal landscape at that point that grew as the business of sports grew.

Quinn starts with some background about the NBA's legal battles, and moves on to something of a play-by-play of his big cases from there. After a while, he became something of a go-to figure for players in all sports, since he developed a large amount of expertise in the field. The sports business exploded economically in the past 60 years or so, which means a lot of money has been coming in. Quinn has been a loud, forceful advocate for the players to make sure the participants received something of a fair share.

It hasn't been easy at times. Two of the great truisms in sports are said to be that "a baseball team never has enough pitching," and that "no owner ever seems to make money." But no matter what you might have thought about player salaries at a given moment, the money is out there. It's not as if ticket prices will go down considerably if the average salary goes down by 50 percent.

It's quite obvious after reading this book that Quinn is smart and knowledgeable. It's easy to see why he has been hired so many times. Yes, there is a little arrogance there, and we could have done without some of the great restaurants' names that are dropped along the way. Quinn also is very loyal to his side in telling the stories about his sports-related cases (he's done plenty of other work in the business world as well). There are a few people on the players' side who don't come off particularly well (hockey's Alan Eagleson, an eventual felon who served jail time, tops the list), but not many.

Most of those on the other side of the table don't come as well, particularly the hard-line owners. NFL Commissioners Pete Rozelle and Roger Goodell aren't two of Quinn's favorites, and NBA Commissioner David Stern only earns a little grudging respect. It's a surprise how hard he comes down on the current head of the Green Bay Packers, Mark Murphy, whom he describes as a 'turncoat" (Murphy formerly worked for the NFLPA) and "obnoxious." Quinn might have made a better case if he hadn't called him "Mike Murphy" in the book. Others do a bit better. For example, NFL Commissioner Paul Tagliabue, according to Quinn, was a worthy adversary and a class act. Every story has two sides, and this has one for the most part. That's fine; it's his book.

The author deserves plenty of credit in one important area, though. This is a relatively easy book to read; you need no legal training to get through it. Quinn makes his points quickly, and the process is relatively simplified.

I'm not going to tell you that collective bargaining is a subject that will keep even the biggest sports fan engrossed. But like it or not, such sessions are part of the sports landscape. "Don't Be Afraid to Win" offers a look behind the curtain behind some of the major moments in sports that didn't involve a game. Therefore, it should work nicely for its target audience.