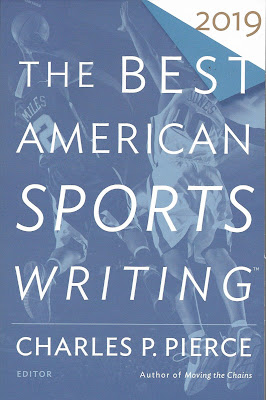 It's never easy to come up with a new way to review a book in an annual series - particularly one that is as consistently good as "The Best American Sports Writing."

This year, though, was easier - thanks to a Tweet.

A sportswriter made a comment on Twitter about the "real world" the other day. He received a reply about how the reader hates it when sports columnists write about something other than sports. In other words, they should stay in their lane, or something like that.

I'd quote the Tweet completely, but after it was pointed out in loud terms (full disclosure: by me, and perhaps others) that sports reflects real life as a whole, he deleted his message. I'm always arguing that as a sports reporter, I can talk about issues involving medicine, marketing, law, immigration, crime, etc. The list is rather endless.

But maybe it would have been easier to tell the guy to read this book.

This has some of the best in sports journalism from the year, and there aren't too many home runs, touchdowns, baskets or goals described along the way.

There is a story about mental illness in the NBA. Sexual abuse in gymnastics. A terrible culture within a college football program. Race relations over the past 50 years. A profile of football player Aaron Hernandez, who had a series of conflict with real-world issues in his too-short life. The murder of a former NBA player.

These aren't the only stories included in this anthology, which runs for more than 300 pages. Profiles of Joel Embiid, Ichiro Suzuki and Becky Harmon are included. There are even a couple of fun entries, like a scavenger hunt in the Super Bowl and the annual Rubik's Cube championship. But Pierce obviously has an eye for bigger things, and most of the choices reflect that.

In fact, if anything Pierce heads a little too far for my tastes (but perhaps not yours) into non-traditional matters. That means there are stories about a round-the-world boat race, mountain climbing, unorganized boxing in Australia, and the lionfish. I had trouble getting through them, but that's probably more my fault than the story's. I did enjoy stories on a prisoner who fixed bicycles and a skier who loved to take risks when it came to locations. Add it up, though, and the number of articles on subjects that didn't draw me in was on the high side.

Therefore, I probably didn't enjoy this book quite as much as other editions of "The Best American Sports Writing" - which I have purchased faithfully since 1991, its inception. Still, those who enjoy mixing sports and "the real world" should not hesitate to pick up a copy of edition No. 19. It's always worth your time and money.

Learn more about this book via Amazon.com

(Be notified of new posts on this site via Twitter @WDX2BB)
Posted by Budd Bailey at 1:42 PM